Like the 12 Points To Insanity reviewed earlier, I got this Cast Cage from Yallingup Maze. Made by Hanayama, the puzzle is about  2 1/2in tall and 1 1/2in in diameter. It consists of a black coloured cage made of steel I think, and contained inside is a 6-pointed asymmetrical star made of aluminium. Construction is reasonably good although the fit and finish of the two halves forming the cage could have been better. The object of the puzzle is to remove the star from one of 4 irregularly shaped "cut-outs" around the sides of the cage. 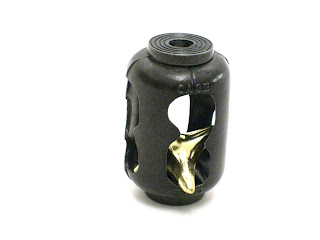 While it looks easy on the outside, it really isn't. The trick is to figure out which of the cut-outs the star can be removed from. I must admit that I solved this puzzle through trial and error; well I suppose then again quite a lot of puzzles of this genre are solved this way anyway. After quite some time trying all the 4 cut-outs, I managed to get the star more than half way out through one of the cut-outs (by chance really) and figured that probably is the correct one. And I was right; with a bit more manipulation, the star practically fell out. 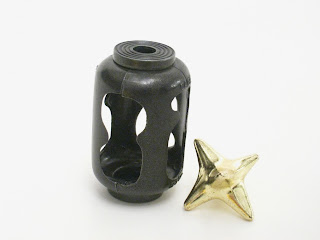 What was more amazing was how easy it was to slip the star back into cage through the cut-out again, literally in a matter of seconds, as compared to the time it took to extract the star! After the star went in, it took me quite a while to get it back out again. The odd shape of the star obviously adds a lot to the difficulty.

Hanayama rates the puzzle 3 out of 6 in terms of difficulty but I think it deserves a 3.5 maybe. It takes a while to get the hang of gripping one of the points of the star and slowly turning and easing it out of the cut-out. With practice, one can solve it repeatedly and I managed to do it several times quite quickly. There are two other write-ups on the Cage so you may also want to look at Brian's and Jeff's blogs.
Posted by Jerry at Saturday, October 08, 2011