Last Thursday two puzzles from Wil Strijbos arrived for me. One was the New Dovetail which I reviewed and posted on this blog the following day, while the other was the First Box. The New Dovetail, which I felt was more a piece of metal art (or you could call it an impossible object) than a serious puzzle was easily and quickly solved and thereafter I turned my attention to the First Box. 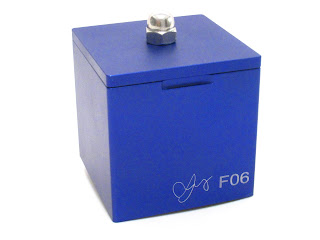 Now the First Box is a different beast. It took me the better part of a whole weekend before I finally cracked it. The First Box has some historical significance. In his own words, Wil says:-


"I designed this puzzle around 1984 and it was my first puzzle box. At that time I produced only 6 of them (for Jerry Slocum - Nob. Yoshigahara - Dick Hess - Edward Hordern - James Dalgety). Now I have reproduced this design in an improved, metal version (previously it had been made of Formica or a similar material). The challenge is: Try to get the Rod out....No Tapping required - No Magnets - No External Tools"
Out of the packaging, one will find that the First Box is a very heavy puzzle. Although I did not weigh it, I compared it with a Revomaze Extreme and found the First Box even heavier. The puzzle is a 7cm square box machined entirely out of aluminium. It has a lid that fits nicely on top with just the right amount of play; not too loose but not tight either. Attached to the top of the lid is a steel round head nut. Instead of the usual ball burnished or polished finish of most of Wil's aluminium puzzles, this one is anodized a deep blue which makes it quite distinctive. Construction, fit and finish is excellent and the puzzle is very well made. In the palm the puzzle feels very solid and weighty, adding to the feel of quality. This is a puzzle that will last a couple of generations. In front of the box is etched Wil's signature and the puzzle's serial number (mine is #06).


The object of the puzzle is to remove a short rod that is inside the box. The rod is visible through a hole at the bottom of the box but it cannot fit through the hole. Wil had already stated in his email to interested buyers that "no tapping is required and there are no magnets". Hence discarding my usual approach, I studied the box carefully to try to figure out how to solve it. Shaking the box a bit, one can hear some parts moving about inside within what appears to be a very tight confined space...a lot of metal inside the box. But aside from this, there are no other clues. I tried the obvious,which was to open the lid and while it moved slightly upwards, something was holding it in its place.
Without giving too much away, this, in my view, is a sequential discovery puzzle where one needs to take steps or actions in a particular order to solve the puzzle. Everything you need for solving (ie get the rod out) is also right there within the First Box...hence there are "no external tools" needed. However, unlike some other sequential discovery puzzles where you can see exactly what you are doing to make progress, for example like Houdini's Torture Cell, the First Box is far more challenging in that you cannot see what goes on inside the box and this makes for a very much more difficult puzzle. I was stuck at certain points without a clue as to how to proceed further. I even mapped out on paper what I hypothesised to be the internal mechanism and its workings but this didn't help much. 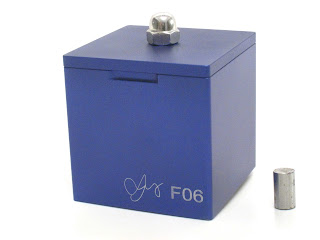 Finally after a number of attempts of trying this and that, I was about to throw in the towel for the night when I realised something which I did not do, or rather, did not do enough of....as well as overcoming one final rather clever and tricky step which eluded me for a while. In the end I got the rod out. When I saw the inside of the box, although the design didn't look that complicated it really is rather clever and unusual, with a bit of a "twist" towards the end as I found out. Also it was quite different from what I had drawn on paper. By my own counting (well... it really depends how you count), there are between 8-10 steps needed before the rod can be extracted from the box. I placed the rod back in and reassembled the box, noting each step carefully. This allowed me to subsequently solve the puzzle again fairly easily.

Overall, a very nice and challenging puzzle this one is without being overly or unduly difficult. While certainly not cheap by any means, the quality, weight and build of the box (especially the machining of the insides) makes up for the very high price. Definitely well worth buying for keeps!


Due to a number of readers asking me for a solution, I have put together diagrams (easier to show visually than to describe in words) of the internal mechanism which shows how to solve the First Box. The diagrams are in PDF format. Please email me for the solution if you require it.
Posted by Jerry at Monday, July 02, 2012