This "impossible object" creation comes from aluminium puzzle designer/maker extraordinaire Wil Strijbos. You may have already come across Wil's first series of dovetail puzzles, the Convex and Concave Dovetail, followed later by the New Aluminium Dovetail. Now the latest incarnation, which even comes in its own numbered set of three is the Cube Dovetail(s). 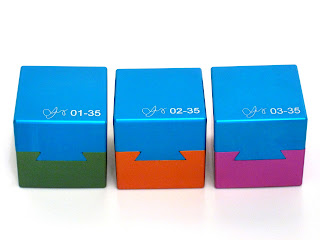 The Cube Dovetails are really quite different from the earlier dovetails, the latter which all came rectangular shaped in just two colours, raw aluminium and anodised green (light or dark green depending on which batch your puzzle came from). In the numbered set, the colour combos are dark green/blue, orange/blue and purple/blue, the same blue that is found on his First Box puzzle. While this departure from the traditional raw aluminium/green combination from the earlier models is a welcome change, I wish he had a yellow/blue cube or even a raw aluminium/blue or some other better contrasting colours than dark green/blue. I actually asked Wil if he had other colours but he said "sorry no". 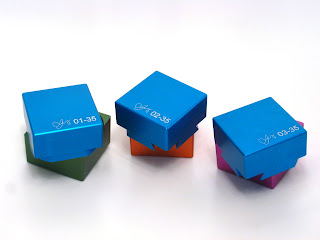 The cubes are excellently constructed and fit and finish are to very tight tolerances. Each cube measures about 4.1cm per side. As I have said in previous posts on the dovetails, these are more "works of art" than real serious puzzles (but of course to the uninitiated or non-puzzler, I suppose these would be pretty tough nuts to crack). However, the term "works of art" here takes on a truer meaning since the cubes have relatively bright colours (except for the green/blue) and a set of three placed together does rather look quite striking and stand out handsomely.

Solving the cubes is pretty easy if you have had prior experience with the earlier dovetails but each of the cubes dis-assemble (separate) quite differently. Once apart, you can see the precision milling/cutting that has gone into making them look impossible to separate...really quite amazing. As an aside here, veteran puzzle collector Michael Tanoff had remarked to me that  the "puzzle" associated (with the dovetail puzzles) is not how to separate the parts, but rather to try figure-out how the two parts fit together, as all three appear to be impossible objects...".

If you already own the earlier Dovetails, well...this set is certainly a colourful and fun must-have; and would enhance your collection. If you don't wish to buy all three, Wil does sell the cubes individually. Allard has also written about the cubes in his puzzle blog so you may wish to check out his thoughts on them.
Posted by Jerry at Saturday, August 11, 2012