Who would imagine a hardware supplier like Lee Valley Tools would have a couple of steel puzzles as part of their inventory. From Jeff Chiou, I knew that they sold the behemoth Indian Puzzle Lock. But I did not know they also sell a steel burr as well as a pair of trick bolts until I chanced upon the latter on Rob's Puzzle Page. Given my penchant for metal puzzles, I decided to check out the Lee Valley offerings. 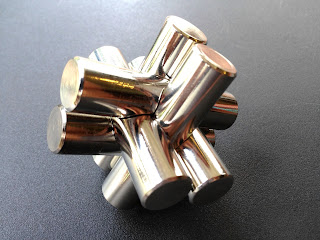 The burr and bolts are all made in Canada. Quality of construction, fit and finish are very good. The burr is about 6.5cm all round, solid steel and zinc plated while the trick bolts are between 3.5cm to 4cm and finished with a very nice matt gray. 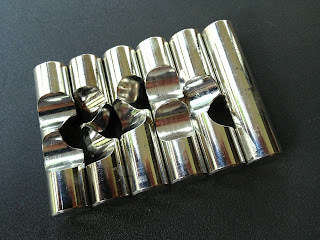 The burr consists of six interlocking rods, with five of the rods each with grooves cut out while the sixth is a solid piece which locks the other five together in the solved state. The fit of the pieces is very good. Unlike aluminium which is lighter, this one being made of steel weighs a hefty 480 grams. There are very few metal burrs I have come across so far, except for Wil Strijbos' 7 and 10 Move Burrs and Charles Perry's Ball Puzzle, all of which I already own, so this was another welcome addition. 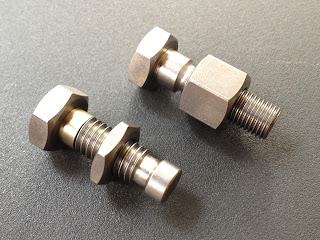 I struggled with the burr for quite some time. Although only six pieces, the burr is pretty challenging, partly because its difficult to try to handle several heavy pieces all at the same time; but mainly because I am pretty lousy with burrs. I used my Charles Perry Ball as a guide but comparing both, the Lee Valley Burr has a different design to its pieces. This made the Lee Valley Burr much more difficult to assemble. Eventually I gave up and checked the solution offered on their website. Without the solution, I would have taken a good while longer to solve.
On the other hand, the pair of trick bolts were pretty easy to figure out. Solved both within seconds, and that's because I have played with other trick bolts with similar mechanisms. The bolts are well constructed, so no chance of any moving parts getting stuck, unlike some other poorer quality ones.

All three puzzles came at a very reasonable price making them excellent value for money. If you do not own a trick bolt, and not sure whether to plonk down the dough for the Rolls Royce of trick bolts; ie one of Rocky Chiaro's, well, here is a chance to own a pair of high quality ones at a very affordable price.
Posted by Jerry at Sunday, October 07, 2012