Where: Tokyo, Japan. Held at the Hilton Narita, Tokyo

Today was the big puzzle exchange day. This is the day where 65 puzzlers (out of the nearly 180 or so participants at IPP33) exchanged puzzles with each other. After the exchange, an Exchanger would go home with 64 new puzzles (minus his own puzzle of course). These were puzzles that are totally new designs and not available anywhere prior to the Exchange.

It takes place in a large hall where rows of tables are set up. Each puzzle exchanger is allocated a table with a placard with his/her name written on it. At 9am, the exchange begins and exchangers and their exchange assistants start moving around the large room looking for other puzzlers to exchange their puzzles with. A lot of movement of bodies everywhere. A round table is set up on one side of the room and atop is a copy of each exchange puzzle for the event. 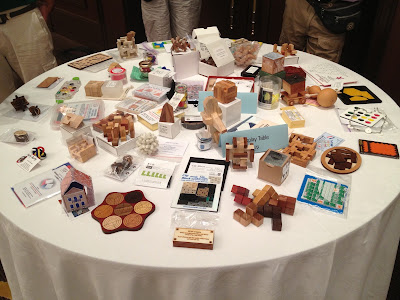 I was invited by Diniar Namdarian to be his Exchange Assistant. Under the regulations of the IPP, one had to be an Exchange Assistant first before becoming an puzzle Exchanger at subsequent IPPs. At 9:15am, Diniar had still not showed up and I was beginning to get worried whether he would turn up. Five minutes later he strolls in; apparently he had arrived from central Tokyo where he was staying. We pick up his exchange puzzles and arrange them neatly on the table, ready to do the exchange.

During the exchange, each puzzler would describe his puzzle and its objective to the other person who would do the same thereafter. I helped Diniar carry his puzzles, keep track who we exchanged with and was also his photographer. Excellent way to see the different exchange puzzles first hand at close range. With 64 other puzzlers to exchange with, the whole exercise took over 4 hours.