Name
Loris. The Loris is actually a nocturnal primate found in the forests of India, Sri Lanka and parts of South East Asia.

Materials & Construction
Body of the box is made of Corian (the material used for kitchen counter tops) while the white sliding lid is made of Velstone, a polyester resin similar to plastic. Construction is very good and built to close tolerances with fine edges, although the corners of my copy were very slightly blunt due to handling and wear over time. 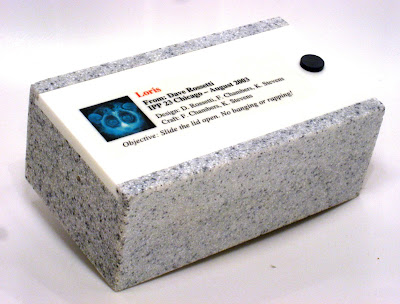 Overview
I met Dave at IPP33 in Tokyo, Japan just this August during the Puzzle Party. He was in front of Wil Strijbos table and pondering if he should purchase Wil's Lotus puzzle that was on sale. I told him how good the Lotus was and we started a conversation.

I mentioned to him I owned one of his past exchange puzzles, the Oriental Toothpick Safe and asked if he had any other similar puzzle boxes made of Corian available. He said he would check when he got home from IPP33. True to his word, a week later he emailed to say he had a Loris box and asked if I wanted to purchase it from him. A couple of emails thereafter and several days later, the Loris was on its way to me.

What struck me when I first opened the packaging was the size of the Loris. This is a relatively large and hefty box and made my Oriental Toothpick Safe look diminutive. Like the Toothpick Safe, the object is to slide the lid off the box (without the need for banging or shaking). 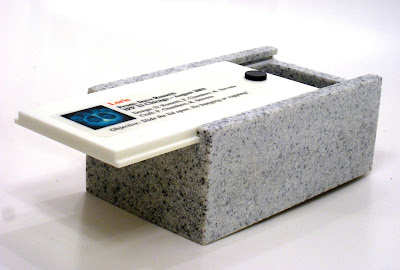 Having puzzled over the Toothpick Safe (which I then needed help from fellow puzzle blogger Brian Pletcher), I knew the Loris would not be easy. And indeed it was not. I tried out the methods I had used on the Toothpick Safe, hoping for some similarities, but there was none. Since no tapping, banging or shaking was necessary, I orientated the Loris is various ways, upside down, sideways, rotating, checking for gravity and dowel pins etc to see if I could gain some clue how to open the box. But nothing worked.

Then I remembered one of my emails to Dave to ask what does "Loris" mean and he replied it is a "slow animal - a hint". I even thought Loris was a brand for wrist watches (the brand is actually Lorus). Suffice to say, Dave's reply gave me a an idea about how to go about solving.

With Dave's "slow animal" clue, I tried something (no spoilers here) and lo and behold, I got the lid to slide open after a while. What I saw inside the box totally flipped me out; a most unusual and unique mechanism locking the lid in place. No gravity pins but certainly gravity plays a part (hint!)

Difficulty Level
Very difficult! If not for Dave's clue, I would not have managed to solve the box on my own. The insides are totally invisible from the outside and one can do nothing but only guess what could be going on inside.

Summary
A very nice, well-made and aesthetically pleasing puzzle/trick box with a good use of alternative materials (other than the usual exotic or hard woods). Given its rarity and unavailability, the Loris is a real puzzle collector's gem!
Posted by Jerry at Wednesday, September 18, 2013