Designer
Edi Nagata, who is also well known for a number of puzzle designs including the famous Polo Shirt and Arrow Case packing puzzles. 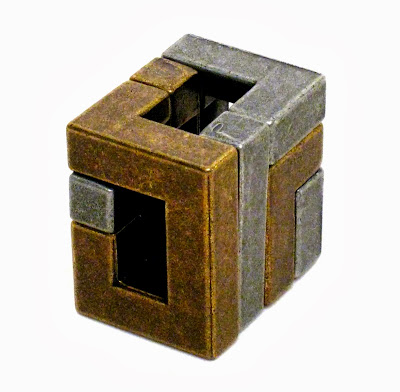 Manufacturer
Hanayama. Launched back in 2011, the Cast Coil is available from various online retailers including PuzzleMaster of Canada and Ebay.

Materials & Construction
Made of zinc alloy and brass. Quality of construction, finish and fit is generally good. Both pieces have a matt patina surface (which is what I like). Not a large puzzle by any means but very weighty in the hands.

IPP
Edi's Twin Snake puzzle, the wooden version of which the Cast Coil is based on, was his competition entry for IPP29 at San Francisco, USA in 2009.

Overview
The Cast Coil is not new, having been around commercially since 2011. I have had it for quite a while and recently got round to it. The object is to dis-entangle/separate the two interlocking pieces that have been "coiled" together. Initially when I started puzzling with it, I found myself getting stuck. Firstly the two pieces are pretty tight (and this seems to be the general consensus amongst several other puzzlers). Secondly, trying to get the right orientation with the puzzle was also not easy as both pieces look almost identical, but not quite (thanks to puzzler George Bell for pointing this out to me). 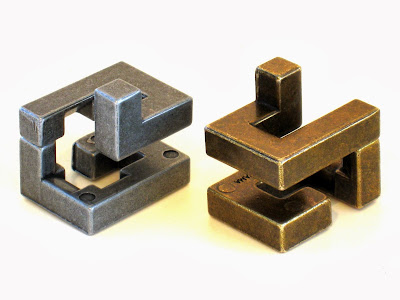 On closer examination, one would discover there are grooves cut into each of the pieces and here is where they allow for rotation of the two pieces against each other. For the initial several minutes, I found the pieces locked in a dead end which ever way I tried. But eventually once I figured out the twist and turns, and how the two pieces interacted with each other, things became easier as I went along.

Re-assembly took me a whole lot longer to "twine" the two pieces back to the original state. I had to once again figure out how to orientate the pieces correctly and then to twist and slide the pieces back into position. The two pieces fit well and snug with relatively tight tolerances, so once in a while, even though the pieces seem stuck, rotation may actually be possible. Just be more gentle and persist.

Difficulty Level
Hanayama rates the Coil at 3-stars (out of 6). About there, I guess.

Summary
Not overly difficult but provides a decent challenge. A well constructed (and very pocket-able) puzzle that can be solved repeatedly once you have remembered the sequence of moves. And yes, after some time puzzling, the two pieces do become looser and you can move the pieces more easily.
Posted by Jerry at Sunday, October 06, 2013