Designer
Stewart Coffin (Design #187-A). To-date he has done 258 puzzle designs. For a list of his designs, click here. 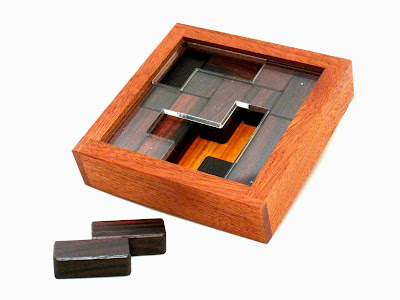 Manufacturer
Eric Fuller. Website www.cubicdissection.com. 42 copies were made, each priced at US$59, but all have been sold out.

Materials & Construction
The puzzle comes in a several wood combinations. The box frame is made of Sapele with a laser-cut acrylic transparent top. The bottom is made of either Spalted Wormy Holly or Canarywood. The six loose pieces are either Cocobolo or Ebony. Construction fit and finish is excellent and all the edges well cut. Tolerances between the pieces are tight; in fact a little too tight in the case of my copy. The high humidity in Singapore doesn't help either.


Overview
The Decoy was shipped to me in the solved state. So the object is to first remove all the six irregular-shaped individual pieces up through the similarly irregular-shaped cut-outs in the acrylic cover, and then to re-pack them back into the box frame. Looking at the shapes of the cut-outs on the acrylic cover, it is obvious the pieces can only come out after being orientated in a certain way. This is a packing puzzle with a slight difference here compared to the traditional "open-top" ones. And in some ways similar to The Rattle reviewed earlier in this blog.

Removal of the first three pieces was a cinch. After taking out the first one, it was just a simple matter of sliding the other two into position and removing them through the cut-out on the cover. Then comes the real challenge. So challenging indeed that I was stuck in the same position for a couple of days. Extraction of the 4th to 6th pieces by way of simple (linear) sliding would not do. I experimented with rotations. One piece could be turned in a certain direction while the other two wouldn't budge. I tried all sorts of ways but no avail. 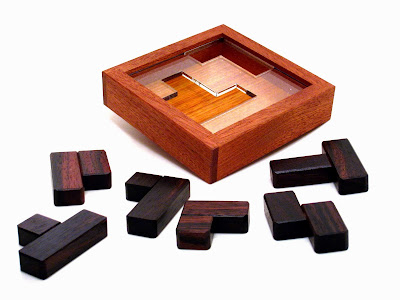 I wondered if the tolerances were too tight so in went the puzzle into my camera dry box overnight. Eric crafts his puzzles at around 55-58% humidity, so I set my dry box to 42% humidity which I thought would do the trick. Alas, even after over 18 hours of de-humidification, there was no still improvement, so I assumed (wrongly here) that perhaps the puzzle was just too difficult for me. In situations like that, normally I would ask for help (after all, is there any point in trying to be a hero and frustrate myself indefinitely?). I emailed Eric and he promptly replied with a solution PDF.

Now here is the clincher...after studying the solution, I discovered that one of the pieces that I tried to rotate but could not, IS actually suppose to rotate....no wonder I was stuck for so many days. The problem was the tolerances were indeed too tight. I emailed Eric again about this and he gave me some information about compression shrinkage; basically it may take a while for wood to expand and then take just as long for the wood to shrink. Here's the excerpt from a post on a woodworking forum Eric had contributed to:-

"I've read several posts lately about wood movement and thought I would post this up in case anyone didn't know about it. It's near and dear to my heart because I work to stupidly tight tolerances when I make my puzzles, and my work gets shipped all over the world (i.e. different climates).

Compression shrinkage occurs when wood tries to expand but is constrained by its surroundings (i.e. locked into a puzzle or a drawer inside a frame). When that happens the wood absorbs moisture but cannot expand. The cells then take on an oval shape, and when the wood dries, it is permanently smaller then before it tried to expand. So, if you make something a little too tight when it's dry and you find it has locked up in humid weather, best thing to do is store it somewhere for a few dry/humid cycles. It might surprise you by working itself out via compression shrinkage!

As far as movement in general, I keep a close eye on humidity in my shop and adjust my work accordingly. If it's super humid I'll make the puzzle as tight as possible while still being assembled. If it's dry I'll make sure key joints or places where pieces will interact have a few extra thousandths to move around. I recommend putting a decent hygrometer in your shop and getting into the habit of checking it if you do any precision work. I bought mine at a cigar shop for $20 and calibrated it using a zip-loc bag and some damp salt in a soda pop cap."

In went the The Decoy into my camera dry box for a second time but this round, I kept it inside for a full week. Yes, when the seven days were up, compression shrinkage had taken place; this time when I tried to solve it, all the pieces slid and rotated smoothly and I got every piece out of the box.

"The Decoy (#187-A) is by far the most difficult and my favourite. It is the only one that requires a slightly loose tray or rounding of corners to solve."

However, it is not so unduly difficult that you can't repeat solving it. As I mentioned above the first three pieces come out quite easily, its the next three that will pose the challenge. But you will only be working with three pieces. With some practice, the moves can be memorised and you will be familiar with the sequence after a while.

The Decoy starts off easy and gives you the impression that you are doing well. But along the way, the trickiness comes into play and here's where the difficulty begins. That's why its called the "Decoy". If you like packing puzzles (with a twist), this one is a real gem!
Posted by Jerry at Monday, November 04, 2013