UPDATE 30 September 2017: Ball In Cylinder #2 is now AVAILABLE again! Please email me at smallpuzzlecollection@gmail.com to purchase. 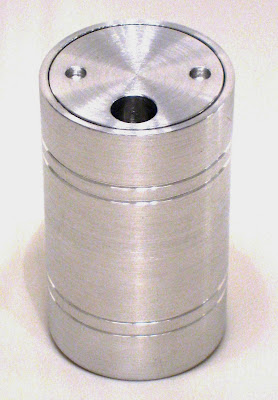 Manufacturer
Jerry Loo. Limited availability as of this post. Please PM me via my Profile email if you are keen to buy one.

Materials & Construction
The BIC #2 is made entirely of 6061 aluminium, while the Special Edition, copper. Ball bearings are steel.

IPP
I had planned to enter both my designs the BIC#1 and BIC#2 for the IPP33 Nob Yoshigahara puzzle design competition but was advised by Nick Baxter, the organising chairman, to only enter one design in order to avoid confusion. Hence the BIC#1 became the competition entrant, my first!

The design of the BIC#2 was conceived at the beginning of this year, a couple of months after my BIC#1 appeared on the market. For a brief history of my first and second puzzle design attempts which resulted in the BIC#1, click here.

How to tell difference between the BIC#1 and #2? Dimensionally they are the same. The BIC#2 has a pair of circular lines on either end while the BIC#1 has only one. The exit hole on the BIC#2 is also off-centre to one side. Like the its predecessor, the object of the puzzle is to remove the hidden ball bearing within the cylinder.

I had received positive reviews from several well known puzzle bloggers in the community who had played with the BIC#1, including Allard Walker, Kevin Sadler, Roxanne Wong, Gabriel Fernandes and Oli Sovary-Soos. I was very encouraged by this especially since my second design, the BIC#2 employed not only a totally different mechanical trick from the #1 but was in my personal opinion, measurably harder as well.

With this new design I went back to my old pal the metal fabricator (an elderly gentlemen who cuts, drills and grinds everything by hand) and showed him what I wanted. By now he has had a lot of experience producing my BIC#1s. So he gave me a nod and a smile and said "no problem". While the BIC#2 is a more difficult puzzle with more complicated internals, strangely it is actually easier to fabricate than the BIC#1 The first prototype was made and after some minor adjustments and tweaking, I produced a small batch of BIC#2s. 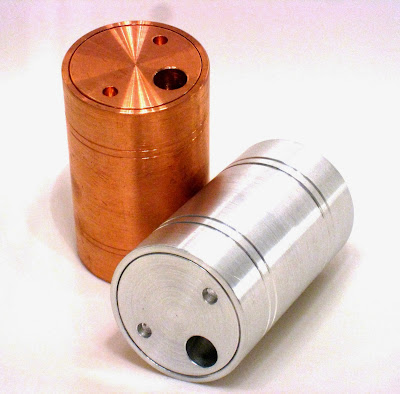 During this time I also wanted see how the puzzle would turn out in copper. As copper is less common for sale on the retail market in small quantities than aluminium, the raw material was prohibitively expensive! And not knowing the kind of response I would get, I bought just enough copper to make four copies, three of which have all been sold, leaving the last one for myself. One thing's for sure, a copper BIC#2 is really heavy! It weighs about three to four times the aluminium version. At around 600 grams or so, its about the weight of a Revomaze Ex.

Difficulty Level
From what I have heard, so far only a handful of puzzlers have managed to solve the BIC#2. Not sure if this is good or bad tho'? Perhaps there are those who have solved it already but make no mention of it. I hope no one has given up on it yet. If anyone who is reading this needs clues or the full solution, please don't hesitate to contact me.

Finally, a word of thanks also to Kevin Sadler for posting his review of the BIC#2 on his puzzle blog.