The guys at Pelikan Puzzles have outdone themselves again. In the last couple of years I have bought many puzzles from them and generally have been impressed by their quality and manufacture, not to mention value for money prices.

But when I got two of their latest offerings, I was blown away! The two puzzles I received, the Closed Box (and Vauban H5) were just simply incredible; the level of craftsmanship has gone further up a notch or two. 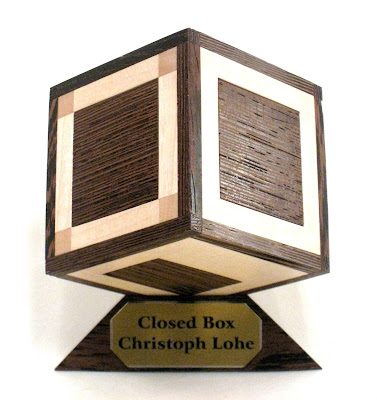 The Closed Box is the design of Christoph Lohe. The woods chosen by Pelikan are Maple and Wenge; nice contrasting exotic woods. The usual way to do it is probably just to have made the cage in Wenge and Pieces in Maple (or vice-versa) but what makes the Closed Box stand out is the way Pelikan have combined the two woods to create a cage which adds to overall enhancement of the aesthetics of the puzzle.

You have to look at the real thing to see for yourself. If you look at the photo (which doesn't really do the puzzle any justice), you will know what I mean. The attention to detail is amazing. Although the pieces are formed by gluing different shapes, the joints are so smooth you would think they were cut from a single block of wood.

Requiring a total of 23 moves (at Level 15.6.3), it is not a terribly difficult burr to take apart (but sufficiently tricky that its no walk in the park either). Christoph had this to say:-


"With just three sticks of length five, densely packed into a cubic
frame, the Closed Box is not the most difficult puzzle, but all but
trivial to solve. It requires 15 moves to release the first stick, and
it displays nicely with six closed sides. I am very happy to see it
made in a high-quality Deluxe version with outstanding wood
craftsmanship." 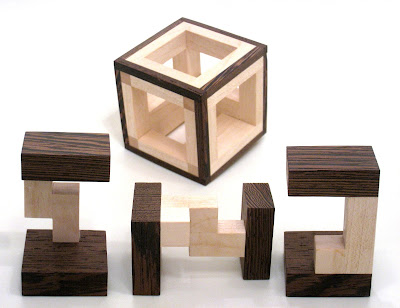 Given my poor record at solving interlocking burrs (beyond Level 6), I was actually surprised that I managed to take the thing apart. But unfortunately unable to reassemble without help. It takes focus and concentration (and of course a lot of time) to be able to properly remember the sequence for dis-assembly and re-assembly, which I seriously lack. For now I am happy just to get the first piece out of anything!

For burr lovers, this is a must-get. For the level of quality and craftsmanship, the price of Euros 49 is reasonable. And did I mention that it also comes with its own stand (and name plate)? A really nice touch and functional addition. Great for display, but watch the very sharp corners!
Posted by Jerry at Thursday, July 09, 2015