I got this from PuzzleMaster but kept it away until a couple of months back when I saw Kevin's review of it in PuzzleMad. There is also a write-up of a wooden version (called the Exploding Cube) by Allard of Puzzling-Times. This is a take-apart type puzzle and both gentlemen have stated that this is relatively straight forward. I couldn't agree more. In fact when I was removing the puzzle from of its packaging, I actually could feel the pieces trying to disengage themselves. 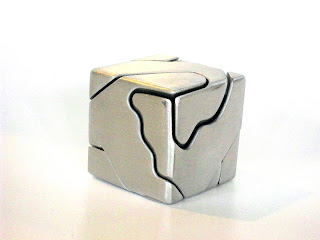 The puzzle is about 1 3/4 inches square and its size feels about just right in the palm, neither too big nor too small and pretty weighty. The quality of my version is reasonably good except that I suppose the 3 interlocking pieces could have been manufactured to slightly tighter tolerances to give it an even snugger fit. While the puzzle doesn't come apart easily when being held, the pieces do tend to exhibit slight movement as they rub against each other. Again I must stress that I am referring to my own puzzle; I am also no expert in metal casting or manufacturing techniques so perhaps this is the way the puzzle is meant to be.

It is also a pity that the "curly" shape of each of the 3 interlocking pieces are formed by fusing of two other separate pieces together, resulting in join lines which are very visible, even externally when the puzzle is in the solved state. (See Kevin's photos on his site). I think with the wooden version, these lines are probably less obvious. 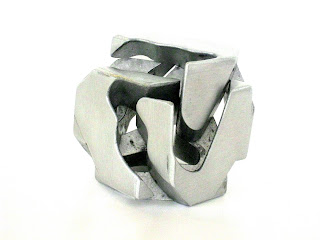 The puzzling aspect has been described by both Kevin and Allard so I would not go into this, except to say that I found it easier to take apart than to put it back together. Overall, despite the few minor shortcomings mentioned above, this is a still a nice looking metal cube and with those curly lines on its sides, makes for an interesting display item.
Posted by Jerry at Tuesday, August 09, 2011