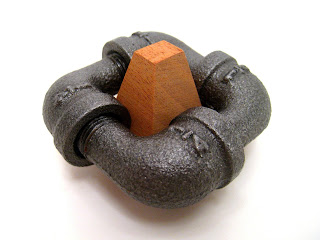 Materials & Construction
All four pieces of plumbing street elbows made of iron. Quality of construction is very good and the puzzle is coated with a sealant to prevent rusting. Wooden display stand included.

Overview
The 4 Street Elbows is in reality an "impossible object". I had come by this "puzzle" through a puzzle exchange with Saul; my Ball In Cylinder No.1 for his Street Elbows. Consisting of four standard looking plumbing elbows, they are joined (and held together) by the screw threads of each elbow. Meaning to say that the pieces have not been joined by welding, glueing, force-fitting etc. When it first arrived, I was wondering how to solve it and whether in fact it was meant to be solved.

Like all impossible objects, it looks unsolvable. I did a check with Saul and he informed me that the puzzle is "solved already". I took it to mean that its really not meant to be solved in any way. Personally I am not sure if I want to try to dis-assemble it...it looks like some heavy duty tool might be needed for this task but I won't take the risk. I might just break something in the process.

Difficulty Level
Saul also mentioned that there is only one person who has removed and the elbows and put everything back into the solved state. Now I wonder who that person might be?

Summary
Not a puzzle for solving by any means, but something to be admired for its uniqueness and physical incredibility. Definitely worth collecting though.