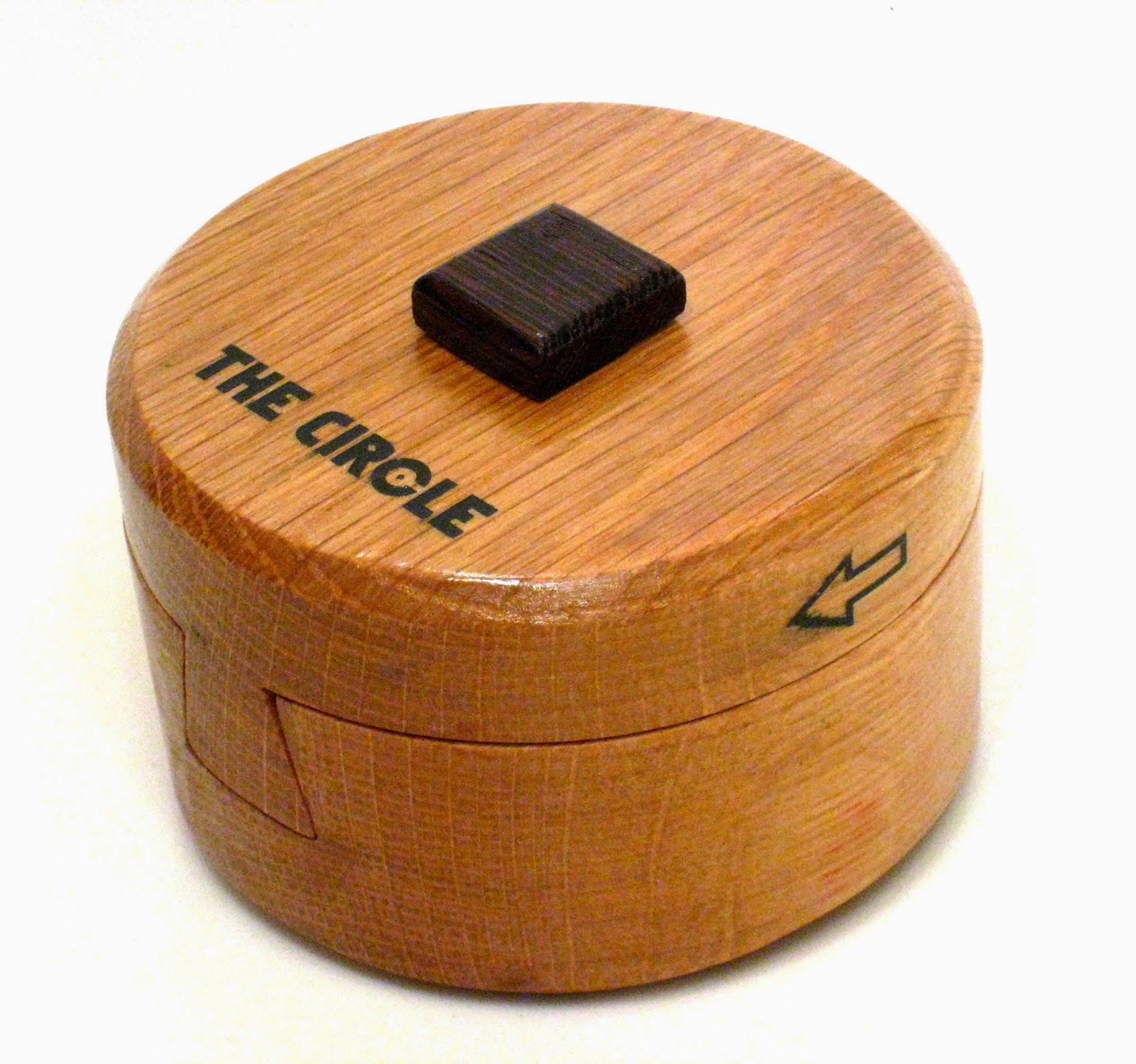 Manufacturer
Shane Hales. Shane made only 4 copies. Mine is #003. #001 and #002 went to puzzle bloggers Kevin Sadler and Allard Walker respectively while the last one was kept by Shane himself.

Materials & Construction
The puzzle is made from Oak while the the square "knob" at the top is Ebony.

The Circle has a handmade (as in hand-tooled) Etsy-ish kind of look as opposed to the precision machine-cut Eric Fuller or Pelikan manufactured puzzles. This does not mean lower quality, in fact quite the contrary; as Shane had deliberately made the two dovetails with a looser fit so that the puzzle can be (slightly) more easily solved. As to why this was done, well, you can read more from Allard's and Kevin's write-ups about the Circle.

I got to know Shane just over a year ago in February 2013. He is a reader of my blog and also a friend of Kevin's. The two gents had been talking about my BIC#1 which I had released in late 2012 (and Kevin had been amongst the first to try out my humble first production puzzle design).

Anyhow, Shane got in touch with me about buying a copy of my BIC#1 and in the course of email exchanges, that's where I learnt that he was also in the midst of designing his first puzzle "The Block", which he later produced only a few copies. Over the course of the year we continued to keep in touch via email and last year, he acquired my special edition copper BIC#2, one of only 4 copies which I had produced.

Several weeks ago, Shane asked me if I would like to receive from him as a gift the #003 copy of the Circle. Of course I would! I was elated. Not only was I getting one of only 4 copies made, but as a gift as well. A true gift giver, he even refused to accept my offer to pay for shipping from the UK to Singapore. Thank you very much Shane!

About 10 days later, a large box duly arrived at my home. When I first took the puzzle out and examined it, I could hear quite a bit of rattling inside the puzzle. If I had not read Allard's review, I would have assumed the puzzle had been damaged during shipment. It did sound like there were broken bits inside (as if a whole bunch of parts and screws had come apart).

The object of course was to separate the Circle into two halves. My experience with take apart dovetails were limited to Wil Strijbos's aluminium dovetails and the Wunder Puzzle. While challenging in their own way, these did not take very long for me to solve. All within minutes rather than hours. Kevin had commented he took a really long time and Allard took about half an hour. Considering both of them are hardcore puzzlers, I knew the Circle would probably take me no less than the time required by Allard, at the very best.

What was puzzling were the rattling noises! I couldn't figure out how the dovetails were kept together when there was all this ruckus going on inside (well I mean, loose parts can't possibly keep two halves interlocked tightly together, right?)

Anyway for the next two nights, I spent a couple of hours each playing with the Circle, pushing and tugging at the two halves here and there, and even shaking the puzzle (gently) tho' the instructions did say no force was required! No luck at all.

Thereafter I had to stop for about 5 days as I went on a family vacation. I brought the Circle with me but didn't spend any time it. I wasn't too keen to take it out of my suitcase just in case my 3.5 year old son wanted to have a bash at it :-)...he may just end up bashing it (and here there is no possibility of a replacement from Shane). When I got back from my holiday, I decided to dedicate some time to the Circle. With full focus and concentration, I embarked on the Circle again.

I continued with my investigative trial/error and random approach towards the puzzle. The 2 dovetail halves are locked together by 3 mechanisms, 1 primary and 2 secondary. The secondary mechanisms were easily discovered early on during play and these are the more common (and usual) methods deployed to keep two parts of a puzzle together. I knew they could not be the ones keeping the Circle together.

Anyway, I continue with what I was doing and after a fair amount of time, all of a sudden the two dovetails came apart a bit. Not the least solved yet... but here I had a partial view of the insides and immediately knew what was causing the rattling. More importantly, I now had an idea of how the puzzle worked and what I needed to do. I had stumbled upon and solved the first stage. But the puzzle was only about a fifth open. As I continued my (correct) approach, eventually my theory proved right and the two dovetails slid apart nicely.

First off, the internal mechanism keeping the dovetails together is not technically that complicated. In fact the mechanism/trick is rather simple, tho' unusual. The way Shane has employed the use of if is (in my opinion) very clever, and of course totally unexpected. The solution is not difficult to execute once you know it, just that it does take time to complete the steps, quite a number I might add. A gentle hand is required throughout.

Reassembly involves the steps in reverse order, a bit of gentle twisting and everything is back to its original state.

Difficulty Level
As one cannot see (but only hear) what is going on inside the Circle, it is very difficult at the beginning, but with some persistence (and without the use of force), the first stage can eventually be reached. Once here, if you can understand the principle of how the puzzle works (yes, there are some physics involved), the next few stages which open the puzzle is very manageable.

Summary
The Circle is by far the most challenging (and hardest) dovetail interlocking puzzle I have come across so far. Marvellous use of an unusual and interesting mechanism/trick, which requires a bit of patience and effort to solve. A really great puzzle and both Allard and Kevin have asked a very reluctant Shane to enter the Circle for the IPP34 Puzzle Design Competition; I fully agree and concur!
Posted by Jerry at Sunday, March 16, 2014