The Centrale (designed by Jean Claude Constantine) is a cute little wooden puzzle. "Cute" and "little" aptly describes the physical appearance of the puzzle. But when it comes to solving it, it is perhaps one of the most difficult I have encountered in the sense that I have not been able to solve it repeatedly, even with the benefit of the solution. This puzzle, which I got from Puzzle Master is no larger than a deck of cards, measuring 31/2 inches x 21/4 inches x 3/4 inch. 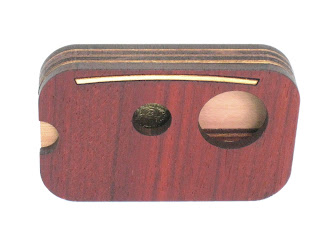 It consist of a box (formed by 7 layers of wood of varying thickness) with rounded corners and within the box is a wooden slider holding a Canadian 5cent coin (which I have since replaced with a nicer looking Singapore $1 coin). It has a curved wooden stripe along the top edge which adds to the overall external design of the puzzle. The puzzle is well made and both the construction and fit are good. It is also one of those puzzles which you can pocket easily and take along for travelling. Which is precisely what I did on a recent business trip from Singapore to the Philippines, figuring that I could keep myself entertained with it during the 3 hour long flight.

The object of the puzzle is to remove the coin from the box by unlocking the wooden slider to allow the coin to be extracted from the larger of the two holes. In the locked position, the coin is visible through the smaller hole. 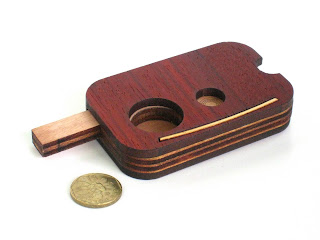 After take off, the pushing and pulling began. But despite everything I tried, nothing I did could get the coin out. Within the puzzle is a mechanism that must be unlocked to allow the slider to move sideways and free the coin. After almost half an hour of trying, I finally got the coin out at 29,000 feet in the sky...but I believe it was purely by chance or through sheer luck. I wasn't too pleased with myself and decided to put the coin back in and try again. This time I was not so lucky and when the plane landed over 3 hours later, the coin was still stuck.

I continued puzzling over the Centrale the next few days to no avail and finally decided to email William Strijbos for a solution. I had read on someone's puzzle blog that he was the man who could provide the key to solving this puzzle. William was very kind and replied me the very same day. Here is when I saw the ingenuity of the design of the internal mechanism. However even following all the steps provided by the solution to the tee, I still had difficulty. I just could not consistently solve the puzzle repeatedly.

I would rate this puzzle as very difficult. Puzzle Master rates it as a 7 but I think it should be an 8 at least. There are a number of steps to be memorized in sequence to unlock the wooden slider to remove the coin. For me, without looking at the solution, I would never have been able to solve it as it was intended. For someone wanting a nice looking, portable, well made and very challenging wooden puzzle at a reasonable price, the Centrale fits the bill.
Posted by Jerry at Friday, July 15, 2011