This wood puzzle in the shape of an egg comes from Mr Puzzle Australia. Made by Pelikan of the Czech Republic, it consists of 4 interlocking pieces and a turned wood stand. The puzzle is made from a combination of different woods which according to the retailer's website, include "....maple, walnut, birch, ash, apple, pear, cherry, oak, beech, plum, and acacia as well as some exotic woods like mahogany, ebony, wenge, walnut, paduak, rosewood, amaranth, bubinga, owango, jarah, meranti, and iroko". 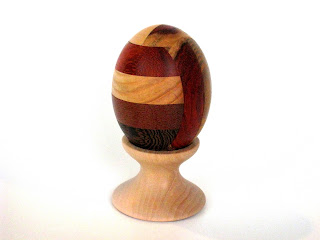 The egg measures 3 1/8 inch tall and has a diameter of about 2 3/8 inch; several times larger than a real egg. The stand is 1 5/8 inch tall. Placed on the stand, the egg makes a very nice decoration for the shelf or on the mantle. Anyone wanting it to remain only as a display piece would be well advised to "blue tac" or "double-side-tape" the egg to the stand as it can be pretty easily and accidentally knocked over.


On my puzzle, although I have no clue as to which particular species of woods were chosen, I counted no less than 6 different types of varying colours and grain pattern. These range from a creamy white to dark chocolate with several shades in-between. It is obvious the makers of the puzzle deliberately mixed and matched grain patterns using different woods to give the egg a striking and colourful appearance. 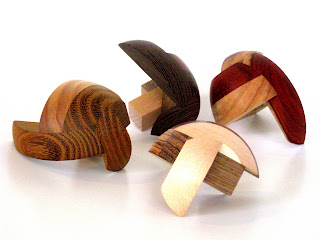 Each of the four interlocking pieces consist of several different woods glued together as can be seen from the photo. All four pieces have been constructed to very tight tolerances. The external surface of the egg is lacquered and fit and finish on my egg is very good. There are however delicate edges in all the pieces (due to curvature of the puzzle) which requires careful handling, since any drop or knock against one of these edges will almost certainly dent and damage the wood. The same goes for any rough handling. When assembled, the egg feels smooth and tight and holds together well. Yet it is not so tight that brute strength is required to disassemble the egg again.

Disassembly and assembly requires pulling and pushing the 4 interlocking pieces in various directions. As this was my first interlocking wood puzzle, I had no idea how much or how little strength I should exert in order to separate the pieces. My first 30 mins with the puzzle got me nowhere. Somehow I just could not get any part of the puzzle to move. Not wanting to inadvertently damage the puzzle through excessive use of force (especially if it was in the wrong direction!), I emailed the retailer for the solution.

Sue Young, the wife of Brian Young, puzzle designer of Mr Puzzle Australia was kind enough to send some photos of Brian taking apart the egg. She did also mention that some of the egg puzzles in stock were pretty tight due to wetter than normal conditions Down Under. Hence that I should keep mine in an air-conditioned environment. In humid Singapore, this was exactly what I did for several days. On the fifth day, with a more than gentle nudge, the first interlocking piece moved at last. Of course by then I already had a peek at the solution from Sue and I knew which pieces go in which direction.

The Egg Puzzle while not very difficult (level 4 according to the retailer) is nonetheless a handsome puzzle, well made with an array of exotic woods and exudes quality. Personally I feel it deserves a place in any puzzle collection.
Posted by Jerry at Friday, July 01, 2011