All Hail The Queen, Pawn & Rook

In one of my earlier reviews, I had already written about All Hail The King. This post will deal with another 3 of Marcel Gillen's chess piece wonders. Like the King, All Hail The Queen, Pawn and Rook are no longer sold commercially by any of the usual online puzzle retailers. By chance, I was really very fortunate to have acquired these 3 rare puzzles from a private seller, who has requested that I not state his identity in this blog. 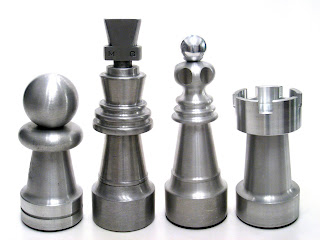 First up is the Queen, standing slightly shorter than the King at 5 1/2in with a base of about 1 7/8in in diameter. The Queen was Marcel's exchange puzzle for IPP 20 in Los Angeles. Quality of construction is pretty good for my copy despite it being cast aluminium and I can detect no joint lines visible on my Queen.
The object of the puzzle is to remove (as I was to later find out after solving the puzzle) a small (fake) diamond from inside the Queen. Diamonds being a girl's best friend was probably why Marcel thought appropriate to hide one inside the Queen. While not difficult, the Queen does pose a bit of a challenge. The solution is similar to the King but with a slight difference. I did not encounter any problem while solving the Queen, as what a couple of puzzle bloggers had experienced owing to the less than perfect quality of construction of their copies, which had occasionally resulted in the puzzle being jammed, while being taken apart.

Next is the Pawn. This one measures about 4 1/2in tall and 1 7/8in at the base. Construction here is also by aluminium casting and the quality of my copy is as good as the Queen.  However my Pawn did come with some minor rub marks on the ball and sides probably due to handling and chaffing against its own packaging.
The goal is to remove a small plastic coin, similar to the one found in the King. While the solution here again is similar to both the King and Queen, there are about 3-4 extra steps needed to be executed in a particular sequence before the coin can finally be extracted from inside the Pawn. This makes it a far more challenging and engaging puzzle than either the King or Queen. This is the only puzzle of the 4 which I decided to resort to looking at the solution after quite some time trying.

Finally we have the Rook. The Rook here is different from the previous 3 in that it is not produced by aluminium casting but crafted from a solid aluminium block (CNC machining perhaps?); much like the way William Strijbos produces his metal puzzles. Quality and construction here are excellent. The crown portion of the Rook is polished aluminium while the body is ball burnished. Shortest of the 4, it stands at about 3 3/4in tall and 1 /78in across at the base.
Hidden inside the Rook is a tiny little chess piece (not sure what it is although it looks very much like a pawn). Once again, the solution and mechanism to take apart the Rook is similar to the King and Queen, but also with a slightly difference twist. Challenge level is about the same as the two and I solved it pretty quickly.

With the exception of the Pawn, these 4 puzzles by Marcel Gillen are not exactly very difficult. If I had to rate them in order of difficulty from easiest to hardest, that would be the King, followed by the Queen, Rook and finally the Pawn. While the puzzle aspect may not rank high for serious puzzlers, these 4 chess puzzles make excellent conversation items and would stand tall on any executive's desktop. All are relatively heavy for their size and can function usefully as nice paper weights! But I guess the real value to this chess puzzle series is their rarity, given they are virtually impossible to find; unless you happen to know someone who has them and are willing to sell. As I understand, there is also a Bishop and Knight in the series, this according to Neil in his blog after he attended the 22nd May 2011 California Puzzle Party in the US. So if anyone reading this has either of these two puzzles and is willing to part with them, you can contact me via email on my profile page.

For other reviews on the King, Queen and Rook, you can refer to Oli's, Jeff's and Jonas' puzzle blogs.