The aluminium DoveTail is designed and made by William Strijbos. It is really a nice solid piece puzzle and very well machined with excellent fit. Measuring a petite 2in x 1 3/8in x 3/4in, the object of the puzzle is to separate the green convex shaped portion from the polished rectangular block. Mine has the #16 engraved onto the puzzle (the 16th unit that William made???). 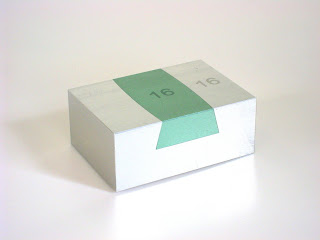 Upon first glance, one would wonder how it would be possible to take apart the green portion from the larger block given it's curvature and "dovetail" joint between the two pieces. Although seemingly impossible physically, the solution is actually quite clever. The DoveTail employs a hidden mechanism that some experienced puzzlers may have encountered before, hence it would not be difficult for this group of people to solve. I managed to solve this puzzle very quickly based on my familiarity with the said mechanism. Once you figure out the solution, you're be pretty amazed, as I was, to see how easily the green piece can defy the laws of physics and come apart from the rectangular block. 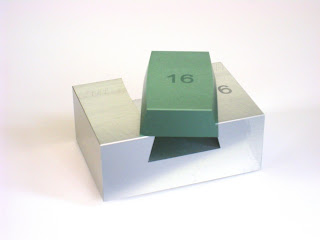 This is one of two similar DoveTail puzzles from William. There other puzzle looks almost the same except that it has a concave (instead of convex) shaped green block. Both have similar mechanisms. For a review of both Dovetail versions, check out Oli's and Jeff's blogs.
Posted by Jerry at Saturday, September 10, 2011