I got the Aluminium Cylinder Box from Oy Sloyd Ab nearly 5 months back and it was only today that I finally managed to solve it! More about this later.... 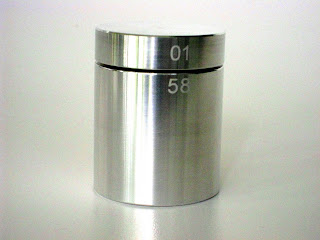 The Cylinder which is designed and made by Wil Strijbos is a very well machined polished aluminium puzzle measuring about 2in tall with a diameter of 1 1/2in. Quality, fit and finish like all of Wil's metal puzzles are excellent. The object of the puzzle is to take the cylinder apart to remove several ball bearings within it. As can be seen from the photo, the puzzle is made up of two main portions, a "cap" on top of the cylindrical body. The cap can be rotated as well as depressed slightly and you will be able to feel that it is positioned atop a spring which returns the cap back to its original position once you let go. Inside you will hear the ball bearings rolling about. At the bottom of the cylinder, there is a small hole to which you can shine a torch light into and see an empty recess within, or in some cases, you may see a ball beariing clanging about.

After I got the puzzle, I spent several days on it and despite twisting and turning, shaking the cylinder and whatever else I could think of to try to take apart the cap, nothing worked. I gave up and emailed Wil for some clues. Wil gave me two clues but not the solution, but at least now I had something to go on. I followed the clues but still could get no where. I decided to give the puzzle a rest and went on to other puzzles that I had acquired that week. The cylinder became forgotten for several months until today that I decided to give it another shot....back to the clues from Wil and this time after some more careful study of the clues,  I finally managed to open the cylinder and out came 4 ball bearings. 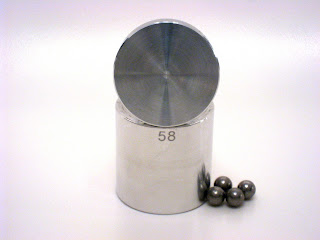 I have deliberately positioned the solved puzzle the way I did in the photo so as not to reveal the internals of the cylinder, for the benefit of those who are still trying to solve it on their own unaided. What amazed me was the way the puzzle has been designed and constructed on the inside to appear rather simple in the physics of how to take it apart, but yet at the same time devilishly clever to make it very difficult to solve without clues or the solution.

To be honest, if I had not gotten the clues from Wil, I doubt if I could have opened the cylinder on my own. Looking at the cylinder now, I have reservations whether I can solve it quickly and repeatedly. For now, I will leave the cylinder opened and keep it away again until I am ready to put everything back together for another bout of solving.

The Aluminium Cylinder has been reviewed by a number of other bloggers so you may wish to look at Neil's, Kevin's, Oli's and Allard's puzzle blogs. For those who really insist on seeing what the cylinder looks like when taken apart, scroll down and see the photo at Rob's Puzzle Page.
Posted by Jerry at Wednesday, September 21, 2011