Since my review of the Cross Threaded earlier in this blog, I subsequently developed quite a liking for nut and bolt puzzles and acquired four others:-

Bolted
I ordered a copy from Mr Puzzle Australia and for some reason which I still cannot fathom, I ordered an almost identical one from PuzzleThis UK. Anyhow, the one from Mr Puzzle Australia is manufactured by Enigma while that from PuzzleThis UK comes from Eureka. Both are relatively large in size measuring 9.3cm x 3cm at its widest. Quality and construction for both copies are good. The one from Enigma is made of brass with a nice patina finish while the other from Eureka I think is made of aluminium with a shiny surface.

If you wish to buy one, get the Enigma one as it has got a nicer finish and looks like a real bolt. They are really more trick bolts than puzzles and I solved them (removing the bent washer) in under 15 seconds. In my opinion really not worth the money if you are looking for some puzzling.

Schraube
This one came from Hendrik Haak's Puzzle-Shop.de. Schraube is german for screw. Made of aluminium, the quality and finish is also good and with a matt surface, it too looks like a real nut and bolt. This is the smallest of the lot at around 4cm x 1.9cm. From a puzzling standpoint, this one is a bit harder than the Bolted and required more manipulation before I could get the nut off the bolt. The mechanism is similar to the Cross Threaded mentioned earlier. 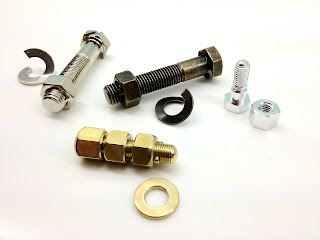 One-Wa-Sure
This bolt puzzle with a catchy name (play on the word washer) came from Rocky Chiaro. In terms of size, it is somewhere midway between the Bolted and Schraube. Measuring about 6.3cm x 2.2cm, it is made of brass with a nice polished surface. Quality, fit and finish is excellent as is typical of Rocky's brass puzzles and the head of the bolt bears Rocky's signature. However, all this quality and craftsmanship comes at a price; the One-Wa-Sure is not cheap! It is one of six bolt and nut puzzles designed and made by Rocky; so if you are thinking of collecting the lot, this will definitely burn a pretty large hole in your pocket.

This is the hardest to solve compared to the other two and given the cost, I am glad the One-Wa-Sure provides reasonable challenge. It didn't take me that long but I still had to play with it for a fair several minutes before I managed to remove the washer from the bolt. I cannot comment on the difficulty of this one compared to the rest of the series as I don't have the other five, so you may want to check out Oli's review that covers all six puzzles. It was on his recommendation that I chose the One-Wa-Sure over the rest as I wasn't ready to plonk down money for all six puzzles at one go without at least trying one.

Out of the four above, only the One-Wa-Sure is really worth buying, that is, from both a puzzling and quality standpoint. But if you are a collector, well, that's a different story...no harm getting all four I guess.

The Copernisis is, in my opinion probably one of the most aesthetically pleasing puzzles around. Anodized in gold with a deep red hue emanating from within through the circular cut-outs and presented in a nice varnished wooden box, you would have thought that this was an expensive display item or sculpture instead of a puzzle. The Copernisis is manufactured and sold by Sonic Games in the UK. 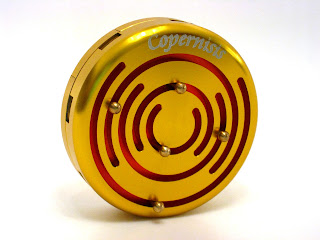 Since the introduction of the first Isis sphere puzzle back in 2006, followed by the Ramisis and now the current Copernisis, all three puzzles in the Isis range have had garnered different opinions, both positive and negative, particularly mixed reactions regarding the build quality of the puzzles. About the Copernisis, you can check out a forum thread here. The Revomaze forums also contains a discussion about these puzzles.

Just like the purple Isis puzzle which I had reviewed earlier, given the mixed comments about the Copernisis, I had no intention to purchase a brand new (and very expensive) one from Sonic Games or elsewhere. However I was still interested to acquire one to find out how the internal mechanism works. Finally when Sonic Games put up for auction on Ebay two gold Copernisis which bore "very slight manufacturing imperfections", I happily managed to snag one at about a third of their current selling price. When my Copernisis arrived, I found only a minor blemish on one side of the puzzle, probably caused during the anodizing. While it was not unnoticeable, I would have at some point in time scratched the puzzle anyway in the course of playing with it, so for me was really no big deal. Other than this "slight imperfection", externally the puzzle was pristine.

The Copernisis is made entirely of aluminium and measures about 83mm in diameter with a thickness of 30mm (including the pins). Overall the puzzle feels very heavy and solid and apart from the said blemish, quality of construction and finish for my own copy is fortunately very good.

At the top of the puzzle, there are 5 pins which can move along their respective circular tracks in clicks. As the Copernisis is inspired by the Heliocentric theory of Copernicus, that being the Sun is at the centre of the Universe and orbited by the planets around it, the pins on the puzzle represent the planets. The object is to move each of the pins such that they are "aligned" and once in their correct positions will unlock a chamber at the side of the puzzle which holds a key. With this key (which is a ten digit code number), puzzlers can log on to the Copernisis website to play a game and win prizes. To aid puzzlers in solving the puzzle, there is another hidden compartment (which can only be opened by solving, but much easier using a more traditional puzzle locking mechanism) which houses code information in the form of an equation of some sort. Additional clues are to be found on the Copernisis website and accompanying pamphlet. Sonic Games claim there are over 180 million combinations possible to unlock the chamber. To me, this is like trying to crack a safe's combination, not really a puzzle to be solved. My personal view (and I think most puzzlers feel the same) is that a puzzle should be solvable on its own, as it is, without the need to resort to any external clues or tools. 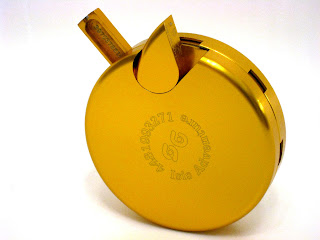 I followed a YouTube "spoiler" video which shows not only how to solve the Copernisis but also revealed the internal mechanism...the author of this video had used a screwdriver to pry open the Copernisis to show the insides...something which I would not dream of doing. Anyhow, while the pin positions in the video may solve a Black Limited Edition Copernisis, it did not do anything for my Gold, so I still had to spend some time figuring out the right combination on my own, but obviously I had something to work from already. So if there's anyone with a Gold who wants this combination, you can PM me via my Profile.

Worth getting? If you are a collector or a serious hardcore puzzler, probably you would want to own one of these; heck...you may even want to get one just because it will look so good on your desk..but the last I checked, the price of a Gold version seems to have gone up by quite a lot. My copy had no quality issues and the mechanism was perfect, but as I said, other puzzling folks have had different experiences with the various puzzles in the range....you decide!

This wooden take-apart puzzle resembling a volcanic mountain (hence the name Fuji 1707) comes from Mr Puzzle Australia. Designed and made by Brian Young as an exchange puzzle for IPP30 in Hakone, Japan, the Fuji 1707 is made from Papua New Guinean Rosewood with the snow-capped peak made of Queensland Silver Ash. 1707 was the year the last time Mt Fuji erupted over 300 years ago and experts have warned that the next eruption is overdue.

The puzzle measures a handy size of about 8.7cm across and 4.3cm tall from the base to the top of the peak.  The Fuji 1707 comes from Mr Puzzle Australia's Craftsman range of superior wooden puzzles and as to be expected, quality fit and finish is excellent with various parts manufactured to tight tolerances. Externally the puzzle looks like a circular pyramid with holes drilled into the sides and one at the peak. 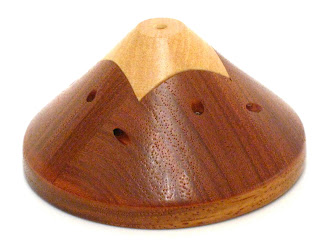 The object of the puzzle is to remove the snow-capped peak from the mountain and find the Buddha Of All-Illuminating Wisdom, the Dainichi Nyorai, hidden inside the mountain. The Fuji 1707 is a sequential discovery type of puzzle, similar to Houdini's Torture Cell reviewed in this blog. To solve it, one needs to execute a series of steps in a particular order from beginning to end. In the case of the Fuji 1707, there are 4 steps to solving the puzzle.

I took a pretty long while before I managed to remove the snow-capped peak; however, when I checked my solution against the one that accompanied the puzzle, I realised that my method of solving was totally wrong and way off the (official ) charts! The official solution for the Fuji 1707 is actually pretty simple (with hindsight of course!). The mechanism for removal of the snow-capped peak is not only rather clever, but the solution (particularly step #2) is in my opinion the most unusual I have across so far! Totally unexpected! Mr Puzzle Australia rates it at Level 8 difficulty, the same as Houdini's Torture Cell, but I am well inclined to give it a 9 rating because the solution is unique and not easily discoverable, and it is really much harder. In terms of steps taken, less steps but more difficult than the Houdini puzzle.

Jeff Chiou wrote about the Fuji 1707 in his puzzle blog a while back and mentioned some issues concerning the mechanism in the puzzle; I believed this has since been rectified by Brian Young to make solving and assembly much more reliable. Certainly I didn't encounter any problems with my copy. By no means an inexpensive puzzle but for the quality and uniqueness of the solution (which is rather fun and you can solve it repeatedly quite easily), the Fuji 1707 is well worth the money and acquiring.
Posted by Jerry at Thursday, April 05, 2012 2 comments: