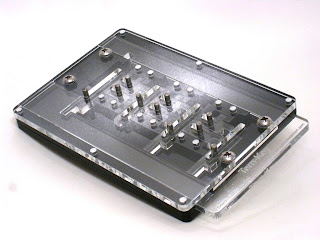 Manufacturer
Sold by Eric Fuller's Cubicdissection in 2009 for $49. Currently not available. New batch of Tern Keys expected to be released in the coming months.

Materials & Construction
Acrylic, white nylon and stainless steel. The unit that is featured in this review is an initial production copy given by Eric to Goh, which will lead to a fresh batch that he will be making for release sometime soon. Construction fit and finish is excellent as per the usual Eric Fuller standards. The preision laser cutting has been carried out to very exacting tolerances. The sliding pieces all move smoothly although occasionally a piece may get a bit stuck but it takes just a slight tug to get things going again. Overall you have the look and feel of a high quality expensive puzzle.

Overview
Tern Key was another puzzle that was loaned to me by fellow Singaporean and puzzle designer Goh Pit Khiam who to-date has designed around sixty puzzles, many of which have been produced and are now in the hands of puzzlers and collectors worldwide.

The Tern Key is similar to the La Cerradura Doble by Robrecht Louage reviewed earlier in this blog, but both have different methods of solving.

The Tern Key is also a "harder" version of Goh's earlier wooden Key Puzzle (Eric will also likely be releasing the Key Puzzle in acrylic format together with the Tern Key). As Eric described during the first release of this puzzle... "The original Key Puzzle used a binary locking mechanism. Tern Key ups the ante with a trinary implementation, yielding a hefty 134 move solution with four locks!...." 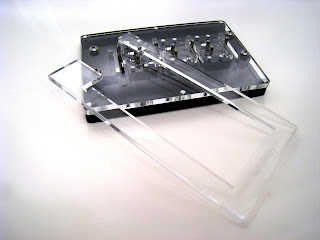 I have never played with the earlier Key Puzzle so I jumped straight into the deeper end with the Tern Key. The object of the Tern Key is to slide the U-shaped key out the right side of the puzzle. The key is locked in place by four "locks" formed by sliders. One has to manoeuvre the sliders of each of the locks left, right, up and/or down to unblock and release the key. The locks cannot be worked on individually one at a time as the movement of sliders of one lock will either restrict or allow the movement of the sliders of an adjacent lock.

Given the interplay of the sliders and locks, one is required to think a number of steps ahead during the solving process. There were several times I found myself almost at the finish, only to be blocked by the last lock and I have to retrace my steps back to the beginning and start over again.

Although there are 134 steps needed to extract the key, a number of these are repetitive. Whether I really made 134 moves I honestly wouldn't know. My main aim was just to get the key out!

Difficulty Level
Very challenging but not unduly difficult. Took me the better part of a couple of hours to remove the key.

Summary
A very enjoyable puzzle and I had great fun with it. You can see clearly all that is happening through the transparent acrylic as you go about the solving process. You get a sense of achievement as you pass each lock and then that a-ha moment when you finally free the U-shaped key. Definitely worth acquiring both from the quality standpoint and puzzling perspective. 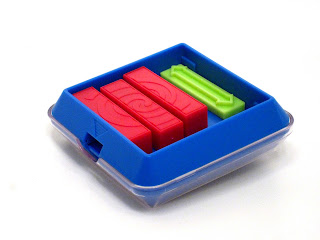 Materials & Construction
Entire puzzle and pieces are made of sturdy plastic, could be ABS resin. Well made, solid and durable.

IPP
The Rectangular Jam was Hirokazu Iwasawa's puzzle design competition entry at IPP25 in Helsinki, Finland in 2005. It won the Judges' Honourable Mention. Iwasawa, who has also won several awards at various IPPs for his designs, is the man behind the AlCyl (Blue Cylinder) and Tritalon, both reviewed earlier in this blog. 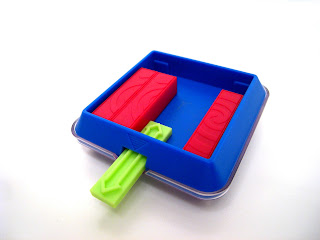 Overview
This puzzle was loaned to me by fellow Singaporean and prolific puzzle designer Goh Pit Khiam whom I had the pleasure of meeting and having dinner with a couple days ago.

While it looks small and simple with only four pieces in a tray, this is quite a devious little creature. The object is to slide the green arrow out of the slot on the side of the tray without lifting the arrow or any of the rectangular pieces off the tray. Given the size of the pieces and their positions in the tray, it looks to be physically impossible. When I first played with it, I thought it was impossible too.

But obviously there is a solution and I might add a rather elegant (in Goh's words) and simple one really. Nice trick to it. Once you have figured the necessary moves, you can solve the puzzle in about under 20 seconds.

Difficulty Level
Challenging but not too difficult. Something that is likely to take minutes (or perhaps hours) to solve rather than days.... which is the type I like.

Summary
A good quality and fun pocket-sized puzzle. In plastic, it is very good value for money also.
Posted by Jerry at Friday, April 19, 2013 No comments:

Due to work and other personal commitments, I have not played with or reviewed any puzzles for a while. But during the last several weeks, a number of new wooden burr puzzles arrived, the latest batch from Jakub and Jaroslav Dvorak of Pelikan and Eric Fuller's Cubicdissection.

Now what was I thinking when I ordered so many puzzles, I am now wondering to myself. Well, for one, I was attracted by some of the very colourful woods used, for example, Eric Fuller's 2-In-1 which uses 12 species of exotic hardwoods. Another reason being I wanted to have a bit more hands-on play with burrs, since I don't own many of them (and absolutely lousy with burrs!)....hmm, but now I am not so sure after looking at this complicated stash.

Virtually all of these are "super expert" level and "many-many-moves-before-the-first piece-can-be-removed" type burrs and interlocking puzzles. I am not even sure which one of these wooden beauties to start with. I still have a backlog of other puzzles which I have yet to touch beyond their unwrapping. If anyone has any suggestions, please feel free to comment.

I think I have bitten off a lot lot more than I can chew. But knowing myself, I would not unduly labour and lose sleep over a puzzle beyond a certain amount of time. I will still enjoy the exploration process of trying to it take apart and re-assembly even if I can't solve the damn thing. So we'll see how it goes with this lot of ten in the weeks, months (or years) to come.
Posted by Jerry at Saturday, April 13, 2013 2 comments: