Now here's an interesting series of packing puzzles that I received during the course of three puzzle exchanges since 2014.

These are none other than Henry Strout's creations. The only other puzzle I have from Henry is his nice Flower String Puzzle. From what I understand, Henry started doing this series of train packing puzzles for exchange since 2013 and will finish off his series in 2018. Apparently, he's got another car/tender and an engine to complete (if anyone has more accurate information or otherwise, please PM me). 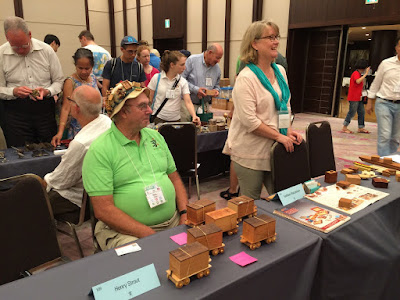 All the puzzles bear the same style/theme...namely to pack anywhere between 8-10 irregular shaped block pieces into a train "car". Levels of difficulty also vary since each of the train cars or box contain different number of pieces and within each car, there are some protrusions or fixed restraining piece, which makes the puzzle that much harder.

Each of the train packing puzzles have been/will be either designed by Henry himself, or someone else. As I joined the Puzzle Exchange only in 2014, I missed out on the earlier first train puzzle. What I have are the train puzzles for the last three years:- 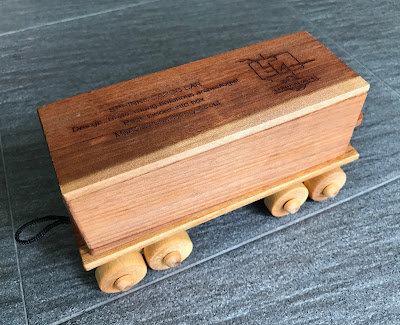 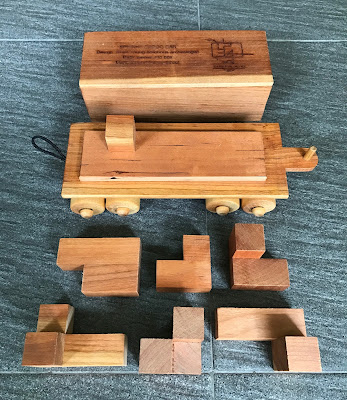 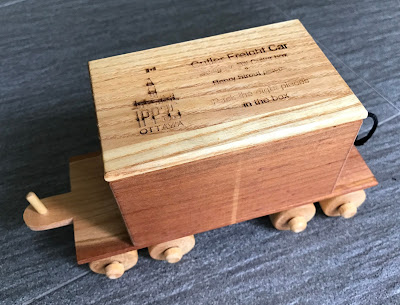 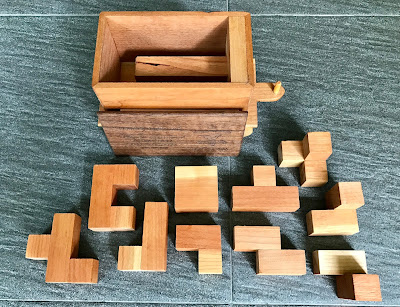 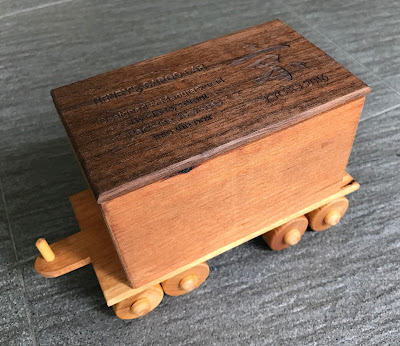 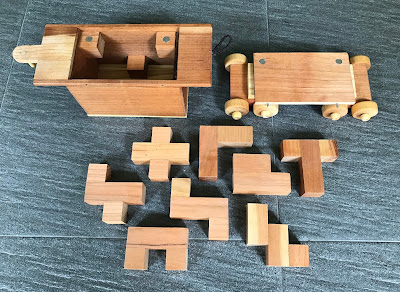 In terms of difficulty, lets just say these are not so easy as they seem. In fact they are pretty challenging. The hardest I think would be the Cutler Freight Car with its 10 pieces and easiest is the Sphinks Cargo Car with only 6 pieces (I know because I was able to solve the latter) and in between Henry's Cargo Car.

A nice idea to create a series of related puzzles for exchange. And for anyone who enjoys trains and/or packing puzzles, this will be an interesting addition to your collection, that is if you can get the complete set.

Here's a 2D packing puzzle that has occupied me for the last couple of evenings. The ZG#1 looks like your typical packing puzzle but comes with a twist...literally! Designed by Mineyuki Uyematsu (MINE) in 2013, it has a 3-unit piece anchored to the tray. This is a restraining piece that adds to the difficulty of the puzzle, even tho' it is able to rotate 360 degrees. 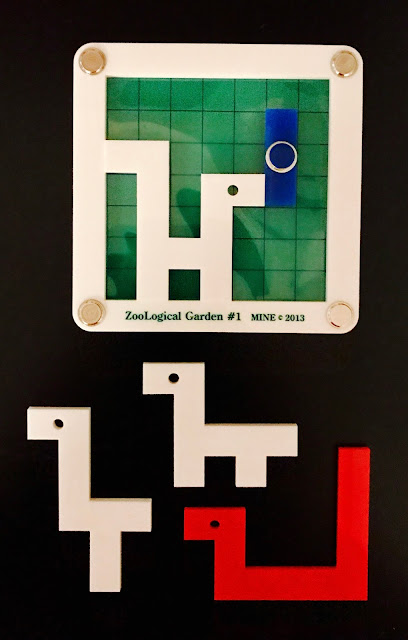 The four loose pieces look pretty "simple" enough and are precision laser cut to resemble the shape of "animals", hence the name of the puzzle. Don't know about you, but I can (see) a chicken, snake, skunk and coyote! The tray is a regular 7x7 grid square.

There are two challenges here:-

#1 - Place all the three white pieces into the tray
#2 - Place any two pieces AND the red piece into the tray. (Problem-it doesn't say which two to use)

Simple looking but the puzzling is anything but simple. In fact it is damn challenging especially #2.

I didn't have too much problem with challenge #1 for this puzzle, partly because I design some 2D puzzles myself and have played with a number of them, and some with rather odd solutions (hint). However challenge #2 eluded me all the while. It is very difficult because you need to first find the two correct white pieces and then combine them with the red piece. (my interpretation of challenge #2). Despite my many attempts at trying the (three) possible combinations to figure out which of the two white pieces to use, nothing worked. I could have been using the right white pieces  all the while (and didn't know it) but still couldn't manage to solve the puzzle.

With the aid of Burr Tools (thank goodness it works for this puzzle), I was able to narrow down the two required pieces and from there arrived at the solution; something which I have no hesitation to admit that I wouldn't have been able to do on my own.

For packing puzzle lovers, definitely a must-get (unfortunately from what I can tell, its not available on MINE's site at the moment). When I bought it from MINE during the IPP in 2013, I remembered it was not expensive at all. So I would say its good value for money with plenty of puzzling; two challenges - the first easier (but probably will be hard for many, except seasoned packing puzzlers) and the second a real toughie!

Posted by Jerry at Wednesday, February 15, 2017 No comments:

If there is a Twelve Bow Ties #3, then there must also be a #2 in between #1 and #3. I had posted a write up about Twelve Bow Ties #1 last year and for the life of me, I don't recall having exchanged a #2....okay, maybe I did and its somewhere is my puzzle closet and I need to go find it. 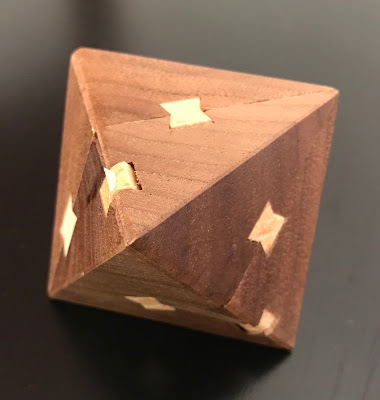 TBT#3 is (apparently) the last of the TBT series. Designed and made by Wayne Daniel, this was Marti Reis' IPP36 Exchange Puzzle in Kyoto, Japan last year. The puzzle is about 7cm x 5cm x 5cm and shaped like two pyramids joined at their bases. Its actually an Octahedron, with eight faces, each an equilateral triangle shape.

My copy is made from what appears to be walnut and maple. Very well made with fine attention to the details and the very precise cuts of the notches and small pieces. Great work! Aesthetically a very pleasing puzzle to look at with the white colour accents on the faces. 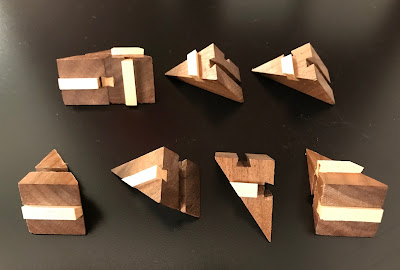 The object is to take apart and re-assemble the puzzle, which actually splits up into 7 smaller pieces (the last two are either glued together or stuck somehow and I can't seem to take them apart). Each of the seven/eight pieces look identical but not quite. They are interlocked against one another and there is a certain sequence of sliding piece by piece out of the whole, one after another, in various directions. You can see from the photo how they come apart.

Unlike TBT#1, this version is much more difficult and if you are not careful with how you take them apart or you deliberately (and masochistically) scramble them after dis-assembly, putting the pieces back will almost guarantee a nightmare, as I discovered. Now, let me go and find #2....and complete the lot!