The Lotus puzzle is the latest (and much awaited) new puzzle from Wil Strijbos. According to Wil, the Lotus is based on his earlier Yen Puzzle which he invented some twenty years ago. The Yen Puzzle was made of wood and the goal is to remove a Japanese yen coin with a nail running through it.

Forward twenty years to the present and the incarnation of the Yen Puzzle is the Lotus, made of precision machined aluminium and anodised blue. The object of the lotus has not changed; instead of removing a Yen coin, now its an aluminium circular disc instead, with a rod running through the centre. 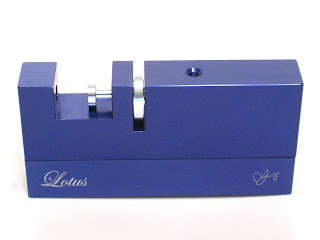 The Lotus measures 11cm x 5.4cm x 1.9cm. Very weighty and solid, there is no feeling of any hollow inside. The puzzle looks like it has been milled from a solid block of aluminium. The entire puzzle is made up of two main portions dovetail joined together.

Construction and quality is of the usual excellent Wil Strijbos standard. With the anodising in blue, the Lotus is the epitome of a fine and premium quality metal puzzle. Etched onto the the puzzle on one side you will notice the word "Lotus" and Wil's signature; the latter which now appears to be a hallmark on most of Wil's anodised metal puzzles, for example the First Box, New Aluminium Dovetail and  Cube Dovetails. 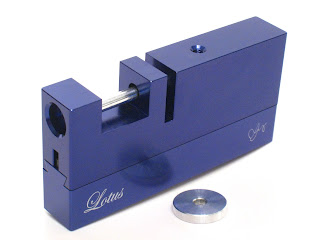 It took me about half an hour of fiddling and pondering before I figured out the solution to removing the disc. Very clever trick indeed! But one cannot help but wonder if there is anything more than this, given the physical appearance and rather elaborate construction of the puzzle.

Wil had mentioned in his newsletter that the Lotus holds other secrets not found in the original Yen Puzzle. However he also requested a "gag order" from us puzzle bloggers not to reveal the extra surprises so that "other solvers will be happy with the AHA moments when they find the secret(s) by themselves".

I shall not say any more lest I give anything away that will spoil someone else's fun with the Lotus. I am not even going to mention what sort of genre this puzzle belongs to (...so don't bother looking at the blog tags). But let me just say this...this is one of the best, most interesting and fun puzzles I have come across. And believe me, even though it may be pretty expensive, it is worth every cent, not just because of its quality, but more importantly, for the puzzling experience.

My advice to all readers is this - until you can explain why the puzzle is named "Lotus", you have not FULLY SOLVED the puzzle. Have Fun!

But if you are seriously stuck as a number of puzzlers have been, you're most welcome to PM me via my blog email and I will be more than happy to take you through the steps to reach the end. Trust me, its pretty complicated. 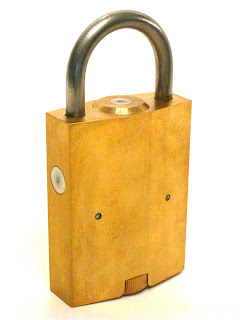 A year and a half ago, I ordered one of Wil Strijbos creations, the Jugo Flower. While waiting for it to arrive, Allard Walker happened to write about this puzzle on his blog and I was given some idea as to how the puzzle was supposed to work. Quite a fair bit of mathematical theory I might add (which is way out of my league) but if you are interested, check out Allard's review on his blog. 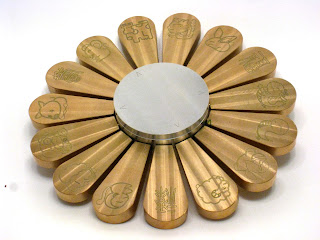 For some reason after the puzzle arrived, I left it on the back burner and busied myself with other puzzles that I had acquired around the same time, only to have forgotten about it until very recently. I was spring cleaning my puzzle cupboard when I found the Jugo Flower inside the original round box it came in, with the petals having lost some of their shine.

The Jugo Flower (a.k.a Game Jugo) is about 13 cm across in diameter and shaped like a flower with 15 "petals". The petals are made of brass and connected to a rotatable aluminium hub. 12 of the petals each have one of the 12 Chinese Zodiac animal symbols etched on them, while the remaining 3 petals have the Chinese characters representing Fortune, Wealth and Longevity.

Quality and construction of the puzzle is very precise and first rate. But despite this, the puzzle feels rather fragile, especially at the connecting points between the petals and the hub. Atop the hub are four small arrows and when the arrows are aligned with the petals, the corresponding petals can all be flipped over simultaneously. The Jugo Flower came in the solved state. The object of the puzzle is to "scramble" the petals by flipping them over (by rotating the hub) and get all the petals flipped back to the solved position. 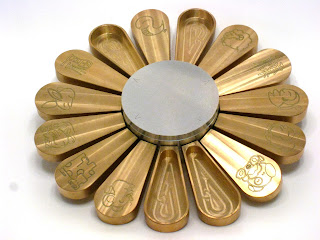 I randomly flipped most of the petals over and tried to get them back in the original order but I could see that this was no easy task. At any one time, all four petals would flip together. Very easy to scramble but difficult to unscramble. I got most of the petals right side up but always, four would invariably remain upside down. The way the Jugo Flower functions reminded me of my Puck Puzzle, which has a somewhat similar style mechanism. I must admit I lost patience after a while and eventually gave up. I guess twisty type puzzles just don't appeal much to me.

Overall a very nice (and very rare) collector's puzzle and I don't regret paying the (very expensive) price to own one...unfortunately, from a puzzling aspect, not really my cup of tea.

I think the Jugo Flower may still be available from Wil Strijbos although I can't be sure. So if anyone is interested, please email me via my profile me for his contact.
Posted by Jerry at Saturday, December 15, 2012 7 comments: