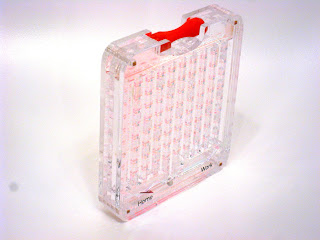 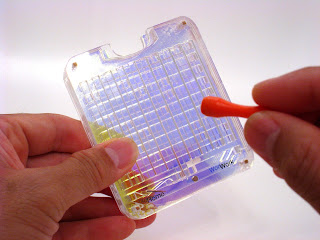 This nice little metal box puzzle came to me from Ebay. From its appearance, it has a vintage look and feel to it. Made by Bits & Pieces, the box is made of brass. Measuring 7cm x 5cm x 1.7cm, it resembles a pill/medicine box. 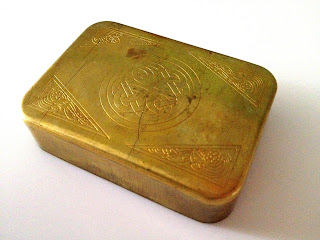 The top of the box is adorned with some sort of Celtic design to make it look unique. The box and accompanying literature bear no clue as to when it was produced but my guess is it was probably manufactured in the 1980s (I could be wrong though). Quality and construction is decent although the external surface has tarnished with age. In the hand, the box feels pretty solid and weighty. 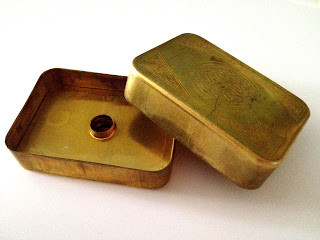 The object is to remove the lid, which held down and "locked" in place. Not a difficult puzzle and I figured out the solution within a couple of minutes. (Clue:- it has the same solution as the YOT puzzles). There is enough space within the inside to hold small items.

This box seems pretty rare as I could not find any information or photo on it from the Internet. Nonetheless, a nice collectable (and functional) item!
Posted by Jerry at Saturday, November 24, 2012 No comments:

How time flies since my first post over a year and a half ago. For this post, I have decided (instead of the usual puzzle review) to showcase a puzzle of my own creation; something that I designed myself.

This puzzle of mine is inspired by the genre of the hidden maze puzzle, the latter which usually consist of a blind maze, the object of which is to navigate a marble or ball bearing from a start point to an end point.  Examples of such puzzles are the Lost Marble Puzzle and Magic Dice. The most famous of all the hidden maze puzzles in recent years is of course none other than the Revomaze. 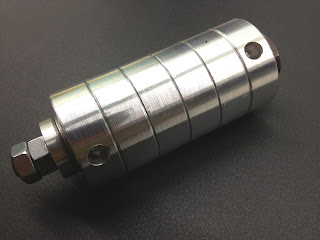 Externally my puzzle appears to resemble a Revomaze Silver Extreme. It is approximately 10.5cm long and slightly over 3.5cm in diameter. It is made of aluminium and steel. But here’s where any similarity ends. Unlike the Revomaze series which all have extremely difficult to solve and intricate hidden maze designs, my little project is rather simple and very amateurish.

I managed to source aluminium cheaply from a local supplier and by good fortune, a metal fabricator willing to produce a single unit of my puzzle at a very reasonable price.

The puzzle consists of 6 circular discs, each approximately 1.2cm thick and stacked together to form a cylinder shape. The discs are held together with an extended steel screw rod running through the discs and secured at the other end by two nuts. 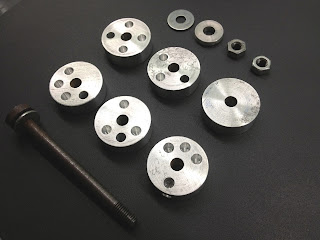 This is my first puzzle design project and I am quite happy I managed at least to get a prototype unit produced that actually works.

I have just finished a second puzzle design and its now in the hands of my fabricator friend. This puzzle involves a ball bearing inside a cylinder that needs to be removed (and no, it’s nothing like Wil Strijbos’ Aluminium Cylinder Box or Washer Cylinder; I am not even remotely close to such genius).

Many thanks to Erhan Cubukcuoglu of Puzzlehan for his comments and advice on puzzle making and hidden mazes.

Update (19 January 2013) - My second puzzle design, which I call the Ball In Cylinder Puzzle, has been produced. Details can be found HERE.
Posted by Jerry at Monday, November 19, 2012 10 comments: 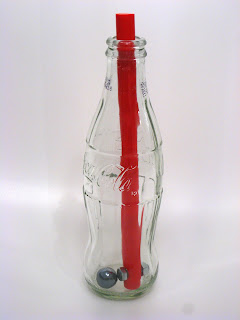 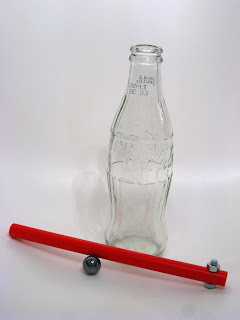 As with such puzzles, a fair amount of dexterity is also required, apart from just analysing how the puzzle could be solved.  I found re-assembly of the puzzle to be just as hard if not harder than the solving but managed to return the bottle to its original state after some time. As I understand, this is one of Wil's easier bottle puzzles, so I expect to have a much harder time with my other two Coke bottles. So stay tuned!
Posted by Jerry at Friday, November 16, 2012 10 comments: