Designer
Kyoo Wong (Thanks to fellow puzzle blogger Roxanne Wong for this info). Why is it called Delta? Well it is shaped like the fourth letter of the Greek alphabet. 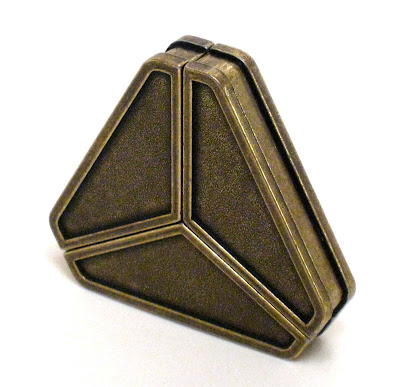 Manufacturer
Hanayama. Available from the traditional online puzzle retailers like PuzzleMaster. But Ebay does have several sellers dealing in Hanayama puzzles and some are really very good value for money, particularly if you buy several different ones at a time, which makes the combined shipping really worthwhile. I got mine for US$10.50 together with four other puzzles in the series.

Dimensions
Triangular shaped, each side approximately 5.6cm with a thickness of 1cm.

Materials & Construction
Made of brass. Quality of construction, finish and fit is overall very good. It is finished with an aged bronzed look which I like very much, similar to the Cast News I reviewed a while back. The appearance gives the puzzle a high quality appearance, as compared to some of the other Hanayama ones with a shiny chrome/gold look the latter which in my opinion, is just not as nice. 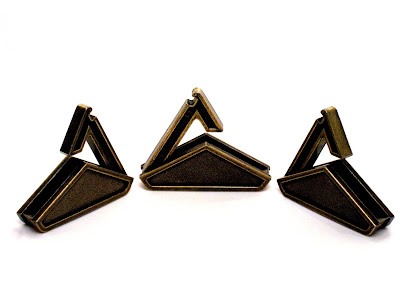 Overview
I am not a hard core fan of Hanayama puzzles but there some designs I would just have to get simply because its made of metal (and I am a sucker for metal puzzles) and the puzzle is aesthetically pleasing, which the Delta is.

The Delta consist of 3 identical shaped pieces interlocked and the object of course is to separate the three. When you start playing with it, you will find that you can separate the three pieces apart to some extent, and even see some of the insides. You roughly know what you need to do. However this is not enough to give you a good idea how the pieces are to come apart.

It took me the whole evening of pulling and tugging before I finally managed to disengage the three pieces. Basically a lot of trial and error. Some dexterity is also needed. I won't say what else is also needed so as not to leave any unnecessary spoiler.

Difficulty Level
Hanayama rates the Delta at 3-stars but I think it should be more like 4. Simply because repeat solving is still very difficult even though I know the solution and the steps needed. It took me another evening before I got it unlocked again the second time. I don't know, It may well be because I am not doing it right?

Summary
Nice well-made puzzle that is easily pocket-able. But can be very frustrating and tedious because its not easily re-solvable. Constant practice would certainly help.
Posted by Jerry at Wednesday, July 24, 2013 1 comment:

One Fish Another Fish

Name
One Fish Another Fish

Materials & Construction
Entire puzzle is made of acrylic (plexiglass). Construction fit and finish is very good as the puzzle pieces are laser cut to tight tolerances.


Overview
The One Fish Another Fish came to me courtesy of Diniar Namdarian, puzzle designer and collector (thank you Diniar). From the design, you can tell why its called the name its called. The very good combination of colours for the pieces consisting of orange, blue and yellow enclosed by a white tray gives the puzzle a very bright, cheerful and attractive appearance.

Initially one would not think its a very difficult sliding puzzle given that its only 11 moving pieces (one space is left empty). This is what what I thought too (after my most difficult encounter with my Cat & Dog sliding puzzle, which still remains unsolved).

Well I should have remembered after so much puzzling that a puzzle that looks simple usually isn't and true enough as I started playing, I realised that not every single piece will move in every direction when it came to the corners. This clever restriction limits the movements of the pieces and makes the puzzle far more challenging than it looks.

I took a good forty five minutes with trying all sorts of moves before arriving at the "finished" position ie the reverse image of the fish...but alas, still not quite there. But I was happy with my personal result and didn't go further.

Difficulty Level
Moderately difficult. Moving the quarter-circle shaped pieces to their intended locations do require some forward planning of sorts since movements may be restricted now and again at the corners.

Summary
Overall a nice well-made sliding puzzle that provides enough challenge (and one that does not take a lot of time to complete). Good for puzzlers that don't have much experience with sliding puzzles (like me). I should have started with this one instead of the Cat & Dog.
Posted by Jerry at Thursday, July 04, 2013 No comments: