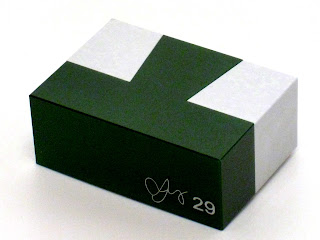 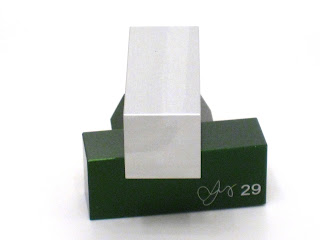 Bowling Alley In A Briefcase

I managed to snag this Bowling Alley In A Briefcase puzzle during the recent Jacques Haubrich Puzzle Auction for quite a reasonable price (well, reasonable in so far as dedicated puzzle auctions generally go). Designed by Kathleen Malcolmson and made by Norman Sandfield, this was their IPP26 exchange puzzle in 2006 in Boston. 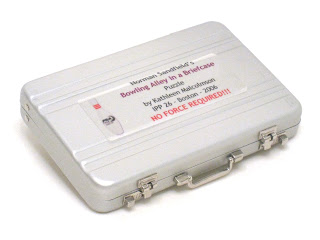 Some time back, I had already come across Malcolmson's and Sandfield's three briefcase puzzles while searching for their availability on the internet; the Double Locked Briefcase Puzzle for IPP24 in Toyko, the Bollixed Briefcase Puzzle which was an entry in the IPP25 2005 Puzzle Design Competition in Helsinki and this one, the Bowling Alley Briefcase. I had also come across an online photo (Warning: Spoiler Alert) of an opened Bowling Alley Briefcase, so roughly I had an inkling how the puzzle worked. Notwithstanding, these puzzles were not available anywhere then (nor even now) and when this Bowling Alley Briefcase came up in the Haubrich auction, I grabbed the chance to go for it.


I would say this is a rather unique puzzle because most puzzle designers and makers create something from scratch or ground up using various materials such as aluminium, plastic or wood but instead, Kathleen Malcolmson has taken an existing item, an aluminium briefcase business cardholder (which is available commercially online) and turned it into a puzzle. In my view, this may be perhaps a harder way to produce a puzzle, since the designer/maker has to work within the constraints and restrictions of an existing object.


First off, the puzzle is a good size for the palm, measuring 9.9cm x 6.7cm x 1.6cm. Made of aluminium, it is a cute briefcase in miniature form, complete with a handle and working lock latches. The object of course is to open the briefcase and here, clear instructions on the lid state that "no major force is required". I would imagine the designer thought this was necessary to prevent undue damage through the unintended forcing open of the lid by either over-enthusiastic or inexperienced puzzlers. Quality of my copy is very good and the briefcase looks almost brand new with no blemishes or marks. 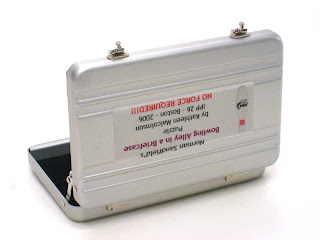 The first step was easy - I undid the lock latches which sprung open, but the lid remained tightly shut. Mind you I had already seen a photo and know what the inside of the briefcase looks like. The lid is kept shut via an internal mechanism which has to be unlocked. But even having seen the internals, it still took a bit of time for me to figure out how to solve the locking mechanism properly. The solution is actually quite simple and elegant and one can only be impressed at the ingenuity of the design. The difficulty lies in not being able to see what is happening inside the briefcase.


The Bowling Alley Briefcase is similar to the genre of puzzles such as Remove The Yoke, Brass Treasure Chest and Centrale where there is a hidden mechanism inside the puzzle that can only be solved via a number of sequential steps taken in the right order. If you have read my reviews of those puzzles, you will realise I didn't have any luck with any of those. Without any aid, I think this is really a difficult puzzle and I don't think I would have been able to solve it on my own. Brian Pletcher in his review of the same puzzle said he too scratched his head over it for quite a long time before finally solving it.


Overall, a rather unusual, unique and challenging puzzle, very hard to come by and I am glad I managed to get hold of one. Too bad it can't hold any of my business cards tho'