I have been hankering after a Zen Puzzle for quite some time now. To me, its probably one of the most aesthetically pleasing puzzles around. With its nice round black Delrin case encircling 5 spiral shaped brass rods to resemble a flower, the Zen is more art than puzzle.

The Zen was designed by the late architect, artist and sculptor Charles O Perry who died in 2011. Amongst the several puzzles that he had designed is also the Ball Puzzle, reviewed previously in this blog. So when not one but two Zens unexpectedly surfaced on Ebay a couple of weeks back, I was determined not to miss out on getting one. Lady Luck was with me all the way and in the end, I won my Zen with a bid price which I would consider to be a very reasonable, compared to previous winning bids.

The Zen is just the right size for the palm, at 6.2cm across in diameter and 2.9cm thick. Heavy for its size due to the brass pieces. My Zen although used, was in excellent shape. Considering the puzzle was manufactured in 1987, it was in near mint condition when I received it. There was not a single mark or blemish on the black casing and no dents or dings on the 5 brass pieces either, other than a light patina. Even the accompanying pouch made of felt was in very good condition. All the pieces fit into the casing nicely with very tight tolerances. Quality of construction for the Zen is first rate. 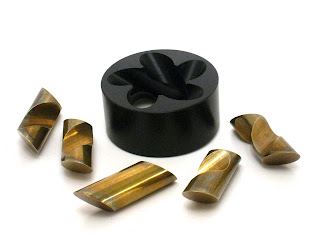 The object of the puzzle is to remove the 5 interlocking (or should I say inter-twining) brass pieces and re-assemble them back together inside the case again. 3 of the 5 pieces are identical while one serves as a locking piece, holding all 5 pieces securely inside the case. The case itself has got curved grooves cut into the insides to receive the brass pieces. The locking piece also happens to have Charles Perry's signature engraved on one of the exposed surfaces. Not by machine but hand etched instead by Mr Perry himself, which gives it a rather nice personal touch.

As a puzzle, the Zen is really not difficult at all, definitely much easier than the Ball Puzzle. To disassemble is pretty easy. To put the pieces back together perhaps takes a slight while longer; but with a bit of trial and error here and there, all the pieces will soon rotate and slip into their niches within the case nicely and smoothly.

Difficult to come by, the Zen is a rare collector's piece which pops up on Ebay occasionally. While certainly not cheap, its not outrageously expensive either; as yet I have not come across any ridiculous winning bid. So grab the chance to get hold of one if you can. When you are done with the puzzling, just leave it on the table and it becomes a sculptural display as perhaps Mr Perry had intended; if not a very nice (and functional) designer paperweight.

For another take on the Zen, check out Oli's review in his puzzle blog.
Posted by Jerry at Thursday, July 26, 2012