The Rebanded Dovetail was Robert Sandfield's and Kathleen Malcolmson's exchange puzzle at IPP32, held during August this year. I managed to get a copy from Wil Strijbos who had attended IPP32 and brought back with him extra copies of the Dovetail and some other puzzles.

This is my second Kathleen Malcolmson puzzle after Bowling Alley In A Briefcase which was reviewed some time back in this blog. The Dovetail is hand-crafted by Kathleen in her workshop. In fact she has recently started her own puzzle blog and her first post is about this Dovetail.

Constructed of light baltic birch plywood and contrasting with walnut and lacewood, the Dovetail spots four distinctive colour tones. In particular the lightly textured surface of the lacewood which forms the two bands surrounding the box gives the puzzle a rather classy and unusual appearance. 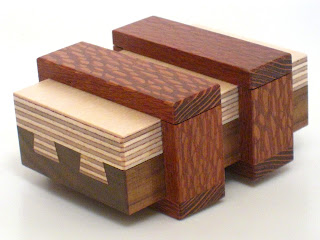 Dimensionally, the Dovetail measures 8cm x 6.2cm with an overall thickness of 3.7cm. The puzzle is very well made and fit and finish is excellent with all sharp edges smoothed out. All parts have been cut to very exact tolerances (see the dovetail joints) making everything feel solid and tight. Of course, all this quality came with a rather expensive price-tag.

The object of the Dovetail is to open the box and remove a one-dime coin within. The puzzle has been classified as a trick-opening/puzzle box. A number of steps are required to open the box and depending on how you count, there are six moves required to free the dime inside. While the Dovetail does not have as many moves needed as some of its more complicated Japanese style counterparts, the execution of the solution is quite unusual and rather clever.

It didn't take me long to figure out the first step and the next two were pretty easy. The fourth step was also easy and thereafter, this was where I got stuck. Took me a good ten minutes or so, but eventually I discovered the fifth step and finally got the box to open. This step was rather tricky (probably the trickiest!) and quite unexpected. When I finally got to peek at the inside, I saw the amount of work that went into making the puzzle....hmm, maybe it isn't that expensive after all!

Overall, I found the Dovetail entertaining with a sufficiently nice amount of puzzle challenge. This is not to say that it is an easy solve...no, by no means at all. But definitely fun and most experienced puzzlers would be able to solve it without too much frustration.