Every puzzle review that I have come across on the Danlock has praised it. I have always wondered what was so special about it, after all, the lock looks like any another padlock. From an aesthetic point of view, it certainly does not have the Popplock-style embellishments nor the typical over-the-top dimensions. 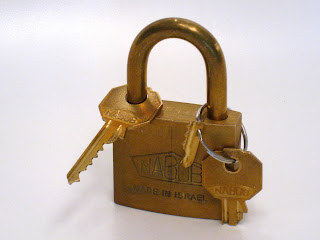 It was only several weeks ago that I received the Model B from it's designer Dan Feldman. I waited for nearly 9 months as it was out of stock then.
The lock itself looks pretty ordinary. Dan had chosen to use a stock lock made by the Nabob company in Israel for his puzzle. The lock measures about 8.5cm tall and 5 cm wide. It is larger than a Popplock T6, but smaller than all the other Popplocks in terms of size and weight. It has the usual brass body but instead of steel, the shackle is also brass. As a real functioning lock, the quality is very good and looks well capable of deterring break-ins.
The "trademark" of the Danlock which makes it recognizable is the broken key that comes with the lock. The object of the puzzle is not just to unlock the shackle but to relock it with everything back to their original place. Dan states in the puzzle instructions that everything that is needed to solve the lock is present; the ring that hold the two pieces of the broken key is not needed, neither is the draw-string pouch that accompanies the puzzle. In a way, the Danlock could be classified as a sequential discovery puzzle. 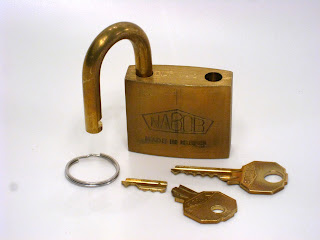 Unlocking the lock is easy part. When you look at the pieces you have, it is obvious that the broken key shard has to be used somehow. Using the broken key, I happily unlocked the lock in a jiffy. The real (and very difficult) challenge is to restore the lock back to its original state, with both the unbroken key and broken key attached back to the shackle.

I was stumped for a number of days at this stage; trying different things but with no success. Finally I contacted fellow puzzle blogger Kevin Sadler for a clue. He gave me a hint and I re-examined carefully everything I had in front of me again; the lock body, shackle and the 2 keys. I decided to experiment with some moves I hadn't tried previously nor thought of. Lo and behold, my efforts were rewarded not too long after that. I managed to reinstate the Danlock to its original state. Certain aspects of the solution is very well disguised and the action steps required to completely solve the puzzle were quite surprising and totally unexpected.

I feel it's by far the best and perhaps one of the most difficult trick locks I have come across. The only other lock that I would consider which can give the Danlock a run for the money is perhaps the Popplock T4. The real appeal of the Danlock lies in its ability to hide a really amazing mechanical puzzle design within the confines of an ordinary and non-script looking padlock. And unlike most other trick locks, here, both the opening and closing are part of the solving process.

Not cheap but the Danlock is good value-for-money given it's puzzling aspect. Definitely worth acquiring. The Model B is available directly from Dan Feldman.