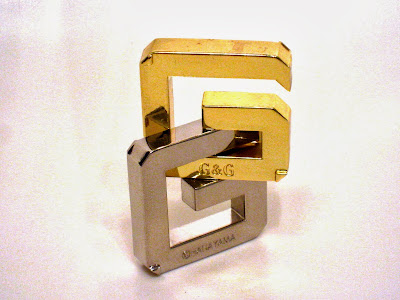 Manufacturer
Hanayama. Launched in June 2013, the G&G is available from the usual online retailers including Sloyd of Finland and PuzzleMaster of Canada.

Materials & Construction
Made of zinc alloy (I think) and brass. Quality of construction here is generally good. One G is finished in chrome while the other is shiny brass.

IPP
The Cast G&G (also known as the Double G) won the 2012 Jury Grand Prize at IPP32 in Washington, USA

Overview
I sat next to G&G designer Jin-Hoo Ahn at dinner during IPP33 in Japan this year. A nice young man (just about twenty years old I estimated) heading for university to earn his degree. I wonder what new puzzles will emerge from him in the years to come. Over dinner he let me try out a cardboard puzzle (similar to the G&G), to which I couldn't figure out of course; at least not for the duration of the dinner. 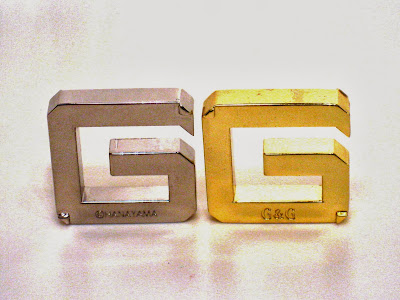 The aim is to separate the two Gs. The G&G if I may say so, is in some ways similar to Hanayama's Cast Coil. You need to do a series of twist and turns to disentangle the two Gs. While the Cast Coil has grooves to allow the pieces to rotate against each other, the G&G has little "bumps" instead, strategically placed on the corners and edges of both Gs. This has the opposite effect of preventing or limiting movement and rotation of the two Gs which makes the puzzle challenging.

While it didn't take me long to split the two pieces, some time early on was spent studying how the two Gs interacted with each other. And of course the usual trial and error of going through the different movements of the Gs. I went through a number of dead ends. After a while, I sort of figured out how each G could move against the other and eventually solved the puzzle. Reassembly here was much easier; slide the Gs together, twist it a bit here and there and somehow it locks itself again.

Difficulty Level
Hanayama rates it at 3 out of 6 stars and I think the rating is about right. Random manipulation is unlikely to help you solve the puzzle, other than by sheer chance. As I mentioned, careful observation would serve you better.

Summary
Not a difficult puzzle by any means, but no walk in the park either. If you are the sort that is hung up about keeping your puzzles new and pristine, I think you can forget it with the G&G. The shiny surfaces of the Gs will be scratched invariably as mine was. Fellow puzzle blogger Gabriel Fernandes' copy was also similarly scratched after the solve; seems like his was worse than mine! And remember, there is no force needed here. If the pieces cannot move, its because its intended that way. Be gentle with the pieces and this will preserve the shine better.
_____________________________________________________________
For photos of my other puzzles please click here.
Posted by Jerry at Saturday, October 19, 2013