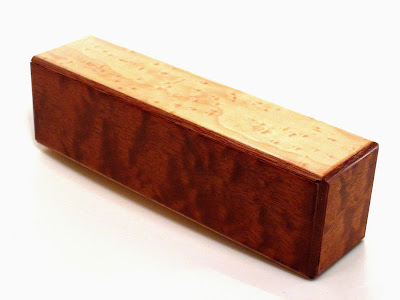 Manufacturer
Eric Fuller. Website www.cubicdissection.com. 50 copies were made, each priced at US$149, but all have been sold out. If not for a manufacturing error, there would have been more copies available.

Materials & Construction
The puzzle comes in several exotic wood combinations. The box and insides are made of Sapele with the 6 veneered outer side panels made of a combination of Quilted Sapele, Birdseye Maple, Flame Maple or Pink Ebony. Construction fit and finish is excellent and all pieces are very delicately cut to tight tolerances.

Overview
The #3 is the third in the series of cigar puzzle boxes from Eric and the biggest in size so far. This one is named "Mike", after the owner of the bar Eric frequents. For the history of how Eric embarked on this cigar puzzle box making venture, click here.

Eric plans to have a total of 6 boxes and #4 is slated to come out early this year. The mechanical trick of the #3 is totally different from that of #1 and #2, so you don't really need to have played with the first two boxes to know how to solve #3. Of course prior experience helps.

I fiddled with #3 for a while; the first step was straight forward and one of the end panels came off in a jiffy. Having experienced the first two boxes, I knew Eric won't make things that easy. I played with the box some more and before I knew it, I had solved it. More by chance really, rather than logical deduction of any sort. 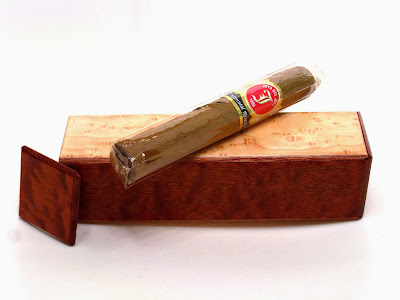 I reset the box and tried to solve it again. Unfortunately I suffered my first puzzle mishap! I had accidentally cracked the opposite end panel. My fault really for being a bit too eager and rough handling. Thankfully the panel remained held together by the veneer so nothing was broken off.

I contacted Eric to check if I could fully remove the cracked panel so that I could do some glueing repair but Eric came back to say that the way the box was designed and built, it couldn't be fully disassembled. However he did give me some advice on how to go about trying to repair the crack as it stood. So for now I have put aside the box in a safe place until I can get my hands on some Elmer's wood glue to do the job.

UPDATE: 8 Jan 2014 - I managed to glue and repair the cracked panel and now #3 is back in order and works as intended.

Difficulty Level
Above average difficulty. The solution was pretty interesting tho'. But personally I found it somewhat slightly easier than Box #2

If you already have the #1 and #2 boxes, well, it goes without saying that you must add #3 to your collection.
Posted by Jerry at Friday, January 03, 2014