Designer
Osanori Yamamoto. For other designs by Osanori, click here.

Materials & Construction
A combination of 5 solid hardwoods giving the puzzle a very beautiful contrasting finish. The frame is Mahogany, the pieces are Wenge, Acacia, Paduak and Maple. The corner embellishments are Maple. Excellent construction and quality.

The Mysterious Galaxy was released in August 2012, a couple of months prior to the easier (not easy) Galaxy Z reviewed earlier.

In fact there are two other variants in Osanori's Galaxy class puzzles (NB: there are several puzzles from other designers also named "Galaxy" this or that) ; the Galaxy I (2011) and the latest in 2014, the Galaxy R. The R is also probably the most difficult of the lot with the most moves.

The Mysterious Galaxy is a framed burr; consisting of a box frame with a number of internal protrusions. The object is to take out and fit back in all the 4 pieces. Unlike the Galaxy Z, only 3 pieces here are congruent (identical). 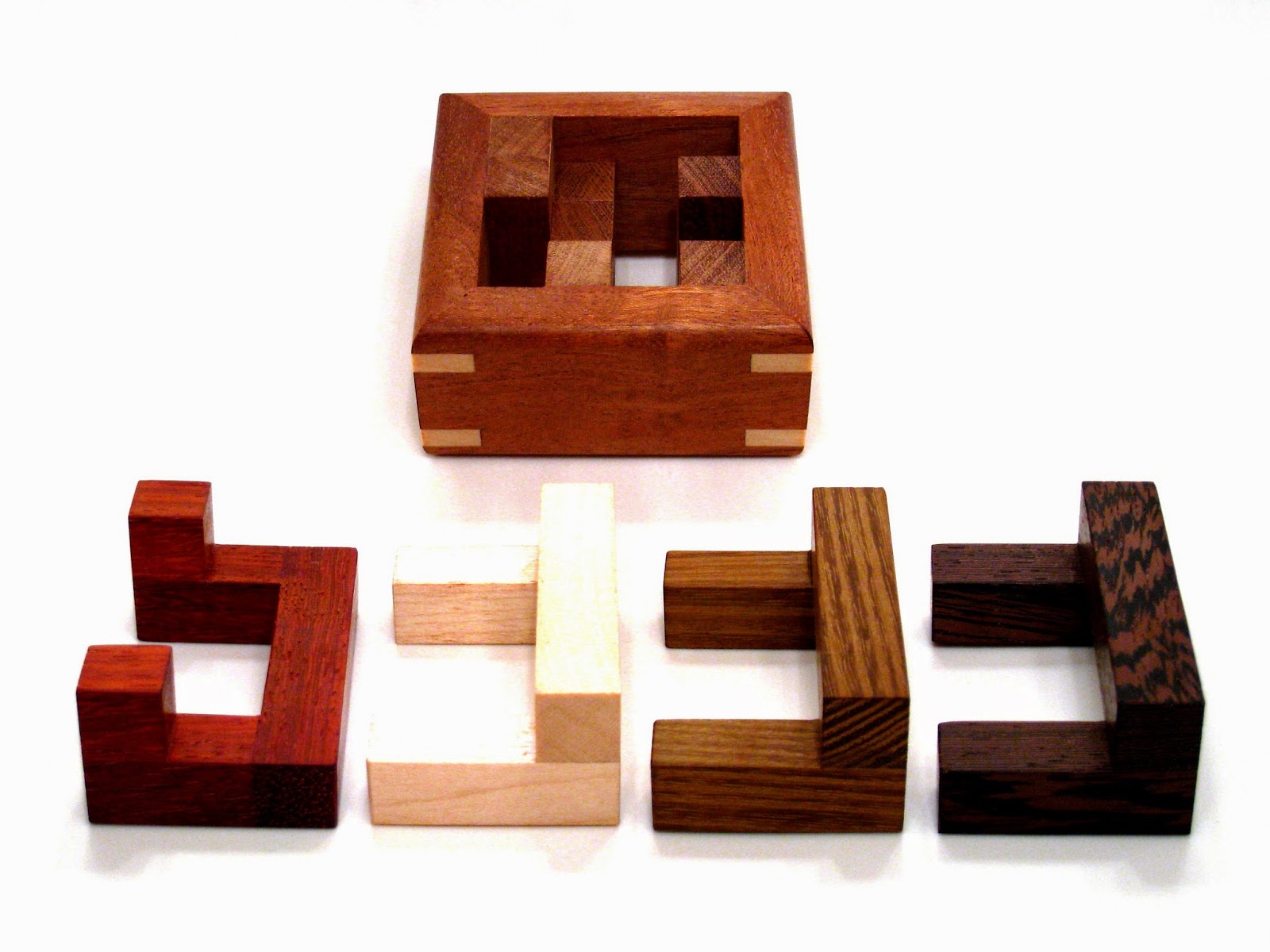 This puzzle is no walk in the park. The orientation and interlocking of the pieces (especially with the one single different piece) with the notched protrusions provide for a very difficult process of removal.

While trial and error may work to some extent initially, it can also land you in a dead end and figuring your way back to the start position then becomes another additional challenge that frustrates.

It took me a good while and several dead ends before I managed to get the first piece out. I thought with photo-taking of the moves, this would help. But nope, too many incorrect moves so photo-taking became confusing and a waste of time.

This is not a pure rectilinear puzzle and rotations are also required. So Burr Tools here won't help very much, save as to show the various possible assemblies of the pieces within the box frame. (which may be sufficient help for some perhaps).

The challenge is also discovering which pieces need to be rotated into position and ensuring rotation is done within the correct space. Done properly, nothing should get stuck. Done wrongly, or worse still with force, and your puzzle may end up dented and damaged.

Difficulty Level
The Mysterious Galaxy is very difficult, particularly the putting back together. It has two solutions, of which one is level 17.5.2.4; in other words it requires 17 moves to extract the first piece, 5 for the next and so on. Unlike the Galaxy Z, I found it hard to memorise the moves for this one. Even after four attempts at reassembly, I still had to refer to the solution.

Summary
Without a doubt, very challenging puzzle (especially for non-burrists like me); and if you already own the Galaxy Z, get this one as well. With its sexy curved edges and colourful exotic woods, even if you can't solve it, it still makes for a very nice display.
Posted by Jerry at Sunday, April 27, 2014