Designer
Stewart Coffin was the designer of the original Multi-Grain 275-A. This version, the 275-AS with a modified grain pattern was by Jerry Slocum. 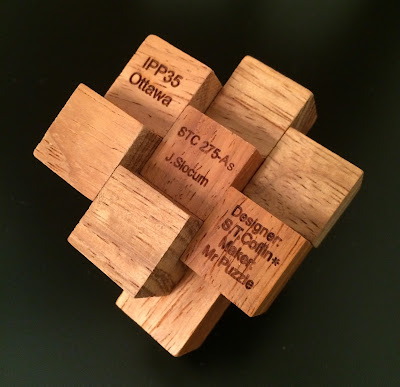 The object is to take it apart and then re-assemble it. Even though its only 4 pieces, the taking apart was pretty tricky, given its symmetrical assembly. The pieces all fit very snugly and I had to pull and push a bit, here and there everywhere before something finally moved. It took me a bit of time to release the first piece.

Like all burr puzzles, I try to take apart the rest of the pieces slowly and memorizing the moves, and placing them in a systematic manner on the table, so that assembly wouldn't be such a pain later. Brian encourages puzzles who want a real challenge to scramble the pieces and "...go for a walk round the block or something..." and then try to fit the pieces back to its symmetrical pyramidal shape, the latter which of course I didn't. 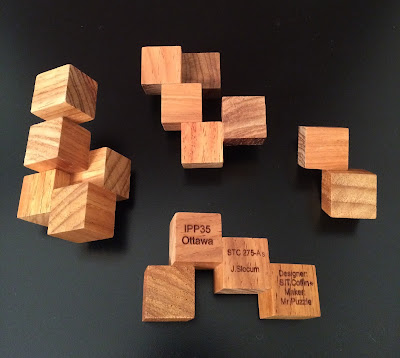 Thankfully I managed to put the 4 pieces back together, and this is after some trial and error which got me a bit worried in the beginning. But I would imagine that if I had followed Brian's advice, the pieces would have looked so confusing later that I would not have been able to put it together correctly.

If it had come un-assembled, it would certainly have been very difficult indeed. Again quoting Brian from his site:

"Even though it’s a symmetrical shape when it's done; visualising that shape while you're assembling the puzzle is extremely difficult even with the supplied photo of the finished puzzle.
An extension of the famous 'Three Piece Block' puzzle that Stewart is famous for; this one is just as hard if not harder than the original"

Difficulty
It is rated as 7/10 by Mr Puzzle but comes assembled so the difficulty quotient is lower.