Stewart Coffin puzzles, especially those hand-crafted, exotic wood and multi-piece interlocking ones are not typically readily available for sale most of the time. And when they do become available, and even tho' they're pretty pricey, they get snapped up in a jiffy. 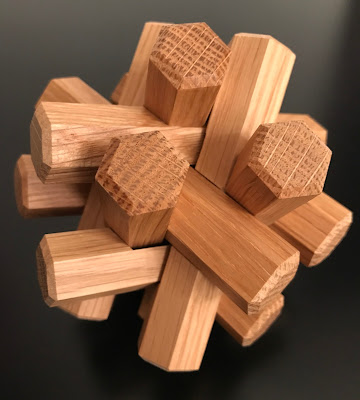 So when I chanced upon the Hexsticks in a hotel souvenir store in Hokkaido, Japan last year, I bought a copy, even though I am not a die-hard fan of such puzzles...but what the heck...it was at a rather reasonable price of 2,900 Yen, or about US$25/-.

The Hexsticks is Coffin design #25A, which was based upon his earlier #25, the Hectix. My version came from a Japanese company called Woody Craft and there doesn't appear to be any website link for this brand. My copy, being made in Japan is a quality product and very well constructed. Not sure what sort of wood, probably local but the fit and finish is very good with no sloppiness or movement of the pieces in the assembled state.

The Hexsticks consist of 12 pieces, 9 of which are identical, cut in a certain way with notches and the remaining 3 also identical, but their notches cut differently. All the pieces have a hexagon cross section and the notches are all cut diagonally at a specific angle. Apparently there are three solution shapes that can be formed from the 12 pieces. This puzzle (and its variants) has been crafted and produced by a number of well-known puzzle makers.

The puzzle came un-assembled and thankfully, there were instructions on how to put the pieces together (for one of the solutions). Honestly, not being good at these sort of puzzles, I would not have been able to solve it without help. Even if the sticks were quad-coloured and I had completed puzzle photo to follow, it may still have eluded me.The instructions are in Japanese but the accompanying photos were clear enough for me to follow without resorting to trying to figure out the text. 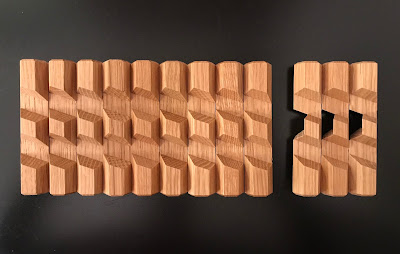 I found that after the first solve and re-doing it second time, I could repeatedly solve it without the instructions after some practice. With 9 identical pieces to start with at the beginning, it is not too difficult to memorize where each piece goes where after a few tries. Completed, it displays very well and truly looks the part as a very serious and complicated puzzle indeed!

Both Brian Pletcher and  Kevin Sadler have solved their respective Hexsticks and Hectix Revisited copies and you can read about their experiences here and here. These guys are super-solvers, so it wasn't too difficult for them.

For those interested, there are several places where the Hexsticks is sold, one is a Japanese online retailer while the other is a US based home accessories store called Monolier, the latter which incidentally sells the same puzzle I have here but at nearly twice the price! And of course Amazon and Ebay as well, just do a search for "Hectix". And for those hard-core puzzle fans that like to know even more about burrs and polyhedral puzzles, read Stewart Coffin's very interesting and informative book here.
Posted by Jerry at Thursday, June 29, 2017