The Internal Combustion puzzle designed by Tadao Muroi is what is known as a "framed burr" puzzle where the burr pieces fit within a fixed outer frame or box. The version that I received from Puzzle Master is made of solid aluminium. There is also a wooden version mentioned in Oli's blog while Mr Puzzle Australia retails their version online under the name Pandora's Box. 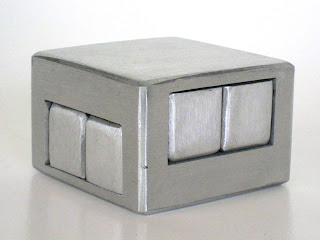 The aluminium version is 2 3/8 inches square and about 1 1/2 inches high. It is pretty heavy and feels quite a handful in your palm. My own puzzle is reasonably well constructed with precision and all the inside burr pieces slide against each other quite smoothly.

The object of the puzzle is to remove all the 4 interlocking burr pieces from the outer frame. None of the 4 pieces are identical. This is a sequential movement type puzzle and if the right sequence is followed, the pieces are easily removable and certainly without the use of any force. The number of steps required to remove all the pieces have been so far documented to be either 9, 12 or 15 (see Jim Storer's comments on his site...warning!...the solution is shown).  There is even a YouTube video which shows the puzzle being solved in just 5 moves. 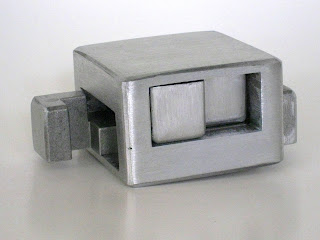 When I first got the puzzle, It took me quite a while to remove the inside pieces, pushing and sliding whatever pieces that could move. As I did not want to look at the solution without giving myself a decent amount of time to solve the puzzle, the way I eventually solved it was probably due not to following the right sequence but rather more through a trial and error process. I believe this is one of those puzzles that one can solve by chance at some point in time through continuous trying, even though the necessary steps are not followed properly in sequence. This is borne out by the fact above that depending on how you move the individual pieces, you could take anywhere from 5 to 15 steps to solve it. 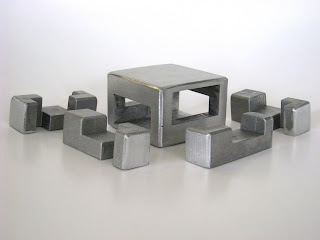 Removing the pieces is the easier (not easy) part....assembling them back within the frame is much more difficult. I would not have been able to do so without the benefit of the online solution provided by Puzzle Master. Although the solution shows the steps to disassemble the puzzle, it does not explicitly state the sequence to assemble it back except to "follow the steps in reverse". If you have solved the puzzle by chance without following the correct sequence, chances (no pun intended) are that the  "reverse" to re-assemble it would prove to be very challenging as I found out. I even had to resort to "marking" each of the 4 pieces A to D with a marker pen to help me remember the orientation of the burr pieces vis-a-vis the frame.

Overall I think this is a nice puzzle to own and one that is pretty difficult (but not overly difficult) to solve (both to take apart and put together again...the latter much harder of course!). Puzzle Master's difficulty rating of 8/10 is spot on. I think with constant practice, one would get the hang of it after a while.
Posted by Jerry at Sunday, July 10, 2011