I was really lucky to get my hands on this last unit of Eric Fuller's Havana's Box No 1. I had missed out on the opportunity to purchase one when 40 boxes were available for sale on Eric's Cubicdissection online store. So when Eric recently emailed me saying that he had this one No1 box left (apparently someone had ordered it but didn't follow up with the requiste payment), I immediately bought one without hesitation. About a week or so later, the box arrived at my home. How Eric came about making the No1, which is the first in a series of more to come and why it was named "The Chris", you can read about it here. 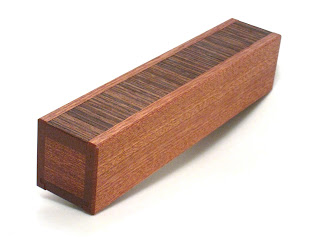 First impression is that the No1 looks much better in the real thing than in photos. It is made entirely of Sapele with darker coloured Wenge adorning both the top and bottom of the box. The Wenge surface is "ribbed", hence apart from giving the top and bottom sides a different colour tone from the rest of the box, it also feels textured which makes handling more grippy. Dimensionally the No1 is 18.5cm long, 3.8cm wide and 3.8cm tall. Quality of construction, fit and finish is excellent and attention to detail is superb. 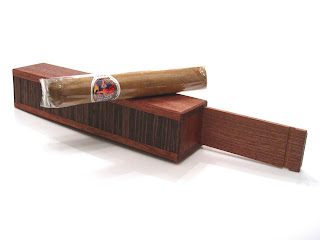 The object of the No1 is to open the box and remove a cigar within (yes, its a real smokable cigar under the brand Free Cuba). I would not say the No1 is difficult, but tricky perhaps. I managed to open the box within several minutes, after some trial and error pushing and sliding the panels of the box. However the mechanism which keeps the box locked is rather clever. Even after I had opened the box and examined the insides, short of ripping things apart to see more and damaging the box forever, I am still not too sure how the locking and unlocking mechanism works. There are in my solution 6 steps to opening the box completely. I say "completely" because half the steps will only get you half the box opened. You may think that you have solved the puzzle, but not yet!.....you cannot get the cigar out with only the box half-opened. Unless you deliberately bend the cigar and force it out...but I don't think that's the way Eric intended. Well I am quite happy I got it fully opened and can now open it quickly and repeatedly without a cinch.

The No1 being the first is the easiest to solve and the rest of the series will come with increasing difficulty. What I really like about it is the design of the box (having a slim long oblong shape, quite different from the traditional Japanese trick boxes) and the rather clever way it is opened. If you don't want to leave the cigar inside, you can use the No1 as a nice wooden box to hold some pens, although it is probably too short for brand new pencils. It may be expensive, but it is certainly worth the money and definitely worth acquiring.

Like Brian, Roxanne and Allard, (who have all reviewed the No1 in their respective blogs and have only positive things to say), I am also eagerly looking forward to No2!
Posted by Jerry at Wednesday, February 15, 2012