In January this year, I had reviewed the Popplock T3 and Popplock T5 in this blog. While sufficiently challenging, both the T3 and T5 were the two easiest of the Popplock series to solve. This is not to say they are easy; not at all, but easier than the rest. With the T6, the difficulty quotient seems to have gone up several notches. It took me a couple of weeks over a number of sessions before I managed to "crack" it open. 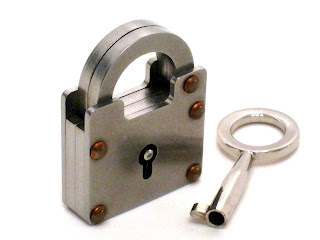 Measuring a diminutive 5cm x 4cm x 1.5cm in the locked position, the T6 is the smallest in the Popplock series and also the most affordable. The T6 is made of 4 layers of steel held together by rivets (here owners have a choice of copper or aluminium) to form the lock body. I chose the copper rivet version as I felt a contrast of colours gave the lock more character and uniqueness. The twin shackles are also formed from two thick layers of steel. All this is probably necessary to keep the cost down. The rest of the series from T1 to T5 is milled from a single block of brass (with the exception of the Limited Edition all-steel T2). While the T6 is a fraction of what it's larger siblings cost, there is no lacking in quality.

In the usual Rainer Popp style, the construction, fit and finish of the T6 is excellent. Despite its small size, the T6 still feels relatively hefty in the hand and probably serves its function as a normal lock just as well as a non-puzzle lock of similar dimensions. 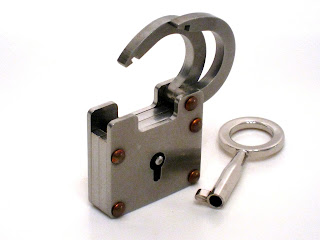 Depending on how you count, there are a total of 5 or 6 steps to opening the lock. To those who are still struggling with the T6, the rivets do not play a part in the solving, neither does just simply inserting the key into the keyhole and trying to unlock it in the usual way. To solve it, you must turn the key in a certain way and in different directions. However, this will only get you to about the second last step of the solution. There is one final step which must be executed before the shackles can be released. This final step is totally unexpected for a puzzle of this nature. It really came as a real surprise to me when I eventually discovered it after my longish struggle with the T6. A very clever and usual mechanism indeed! Hint: there is a clue left by Rainer to give some indication how the shackles might be released but you have to study the T6 carefully.

Overall, a very challenging puzzle lock with a surprising twist at the end. If this is any indication of the increasing level of difficulty of the next two locks in the series I am going to attempt, ie the T2 and T4, well, I would have to hunker down for a long and arduous battle ahead....stay tuned for my review of the T2 after I have solved it!

Four other puzzlers have reviewed and given their thumbs up to this tiny lock which packs a quite a wallop. Do check out Neil's, Oli's, Allard's and Kevin's blogs for their take on it.
Posted by Jerry at Wednesday, February 29, 2012