Designer
Vesa Timonen. A prolific puzzle designer with a number of well known designs including the popular (and wearable) Cast Loop. A number of Vesa's designs have been adopted and manufactured into cast puzzles by Hanayama.

Materials & Construction
Made of zinc alloy coated with chrome. Quality of construction, finish and fit is very good. Personally I would have preferred the puzzle in a matt finish (like Vesa's early prototypes) rather than the shiny chrome look, but I guess this would have been prohibitively expensive in terms of manufacture. 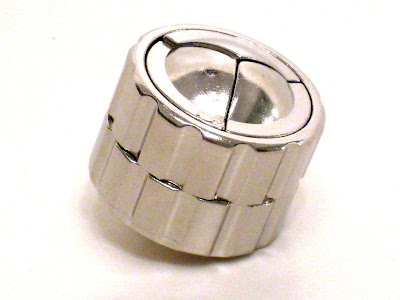 Overview
I first saw (and played with) the Cast Cylinder at IPP33 in Tokyo. During one of the evenings, Vesa had taken out several Cast Cylinders including his prototypes and spread them on the coffee table in front of us. I had a good fifteen minutes or so with one of the prototypes but got nowhere; maybe too much pressure being around other puzzlers I guess :-). I duly picked up one (together with the Cast G&G and some other puzzles) at the Torito stand during the Puzzle Party on the last day of IPP33.

You can certainly tell why its called the Cast Cylinder. It has got two knurled rings forming an external circular "shell" which surrounds and holds in place three other triangular-shaped pieces. The object is to unlock and separate the pieces.

The two rings can rotate freely in both the same and opposite directions. As you spin them around, now and again, there would be some resistance. At certain points, they can be even pulled slightly apart. I had a vague idea of how the inside pieces are kept in place and so began the usual manipulation of turning, pulling and tugging. Very soon one of the pieces began to "drop" out from the bottom a bit and with some more turning, the second  followed suit. After a bit more fiddling, finally the last piece released itself.

Difficulty Level
Hanayama rates the Cylinder at 4-stars and I think this is about right. Taking the Cylinder apart is tricky but not overly difficult. Putting the thing back together is where the real challenge is. Despite the rather long time I spent with it, I was unable to re-assemble the Cylinder into its original state. I contacted Vesa for help and he was very quick to reply with email instructions (which came "straight from his head", as he puts it) since there is no formal text solution or diagrams (Thanks Vesa!). There is a method to it which takes about six steps to getting the puzzle back together.

Summary
A good looking, well-made (and pocket-able) puzzle that can be solved repeatedly once you grasp the right technique. Practice is needed for this puzzle, otherwise you will be fiddling to no end dropping pieces everywhere. A must-have for any Hanayama Cast Puzzle fan!

UPDATE 24 OCT 2013 - I have received numerous queries from puzzlers, who like me have got stuck trying to reassemble the puzzle. You don't need to get frustrated over this and suffer in silence. Drop me a PM via my Profile email and I will get the re-assembly instructions to you.
Posted by Jerry at Monday, September 09, 2013