Yoshiaki Hirano also made an Impossible Object out of 4 Cast Boxes which was exhibited at IPP33 in Tokyo, Japan in August this year, as shown below.


Manufacturer
Hanayama. Released exactly a year ago in September 2012, the Cast Cylinder is currently available from the usual online retailers including Puzzlemaster of Canada as well as several sellers from Ebay.

Materials & Construction
The box frame is made of brass and the ring steel. Very well made and solid. The patina finish with eight screws at the corners give this cast puzzle a look and feel of quality. 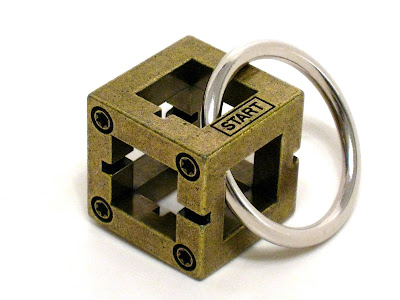 Overview
The object is to remove the ring from the box frame. It's like a 3D version of the Cast Duet. The box frame has got grooves cut into the individual sides where one end of the ring (which is split) can pass through. 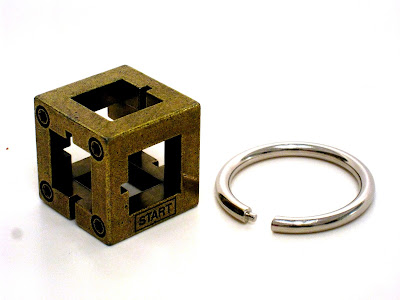 Puzzling involves manoeuvring the ring through the different edges of the box where eventually, one side would allow the ring to disengage. I found it rather difficult at first and kept getting stuck in a couple of the same positions. But I soon realised that not only the box but the ring itself should also be orientated on its different axes around the box frame to allow for greater movement. Took me longer than expected but I freed the ring eventually. I think the engraved "START" and "Box" must have something to do with the puzzle but I am not sure how they help in the solving.

Difficulty Level
Hanayama rates the Cylinder at 2-stars out of 6. Agreed. Relatively easy but it may be rather confusing and dis-orientating at first and rushing to try to solve won't help. Be patient and soon you will get there. Re-assembly is easy. Some practice and one gets the hang of repeated solving it pretty quickly. I am very tempted to buy three more copies to try the Impossible Object shown above.