The Cross was designed by William Strijbos in the 1970s and according to Wil, was his first puzzle. Like all of Wil's metal puzzles, the Cross is very well constructed to tight tolerances and of excellent quality. Measuring 60mm x 60mm x 35mm, the puzzle is made of solid aluminium. While not that large, the Cross is feels weighty in the palm. 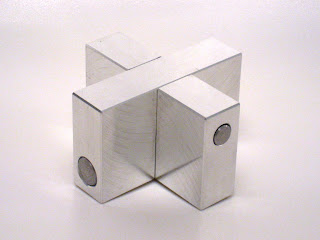 The puzzle consist of two blocks interlocking with each other to form a "cross". Inserted within each of the blocks is a metal rod which locks the two blocks together. The object of the puzzle is to separate the two blocks by amongst other things, manipulating the two metal rods, which can rotate on its own axis and slide in and out in both directions.

I had the benefit of reading Kevin's review of the Cross prior to getting the puzzle, hence I had a reasonably good idea how the puzzle worked. Despite this, I still took about 45 minutes to figure out how to remove one of the rods which is the first of several steps to the eventual separation of the blocks. If I had not read Kevin's review, I think I would have taken at least a couple more hours.

Once disassembled, I took nearly another 30 minutes to put everything back together; this was just as hard, if not harder than the taking apart. I got stuck a few times before both rods were finally inserted flush into their respective holes and locked the puzzle. No banging or knocking is required here as there are no magnets, however you do need to make good use of gravity to solve the Cross. 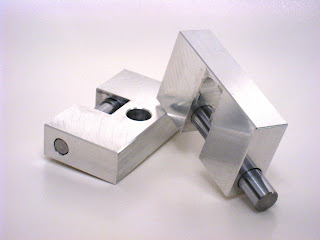 After I had taken apart the Cross, I studied the internals carefully to determine the sequence of disassembly and reassembly, even marking a couple of the parts with little coloured stickers to help me remember the orientation of the puzzle and what goes where and which direction. There is a series of moves in the correct order which must be adhered to. I must say the way the puzzle is taken apart and put together is very clever; really amazing for a first puzzle design from Wil or for that matter, anyone else. After several practice runs, I eventually got the hang of it and managed to solve the Cross repeatedly and fairly easily.

This is a nice take-apart type puzzle to own. While not extremely difficult; it poses a substantial challenge for the mind and for the hands. The number of moves required (and in the right sequence) to disassemble and assemble it keeps the puzzle sufficiently engaging for repeated play. There are three other reviews of the Cross you may wish to check out. (see Jeff's, Neil's & Allard's puzzle blogs).
Posted by Jerry at Thursday, October 20, 2011