This puzzle was acquired at the Yallingup Maze, Western Australia not by me but by my brother-in-law. Being a first time puzzler, he didn't dare to risk spending a lot of money on a puzzle and hence decided to try out a relatively inexpensive item. The Cast Spiral by Hanayama, in all its shiny metal looked appealing and good value-for-money to him. I was going to buy the Cast Cage so it was also in my interest that he got something different in order that I could try his puzzle as well :-) 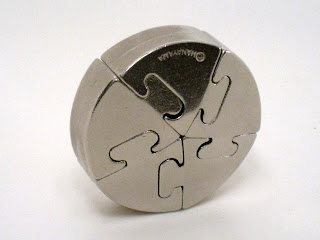 The Cast Spiral is made of aluminium and measures about 48mm in diameter with a thickness at the centre of approximately 20mm. It is made up of 5 solid interlocking pieces which can be "stretched" out like a spiral. For its size, the Spiral feels pretty heavy in the palm. 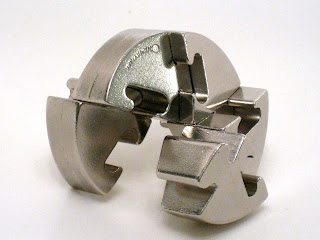 The object of the puzzle is to disengage and take apart the 5 individual pieces. When its fully stretched out, the Spiral's 5 pieces remain locked together, and there appears to be no possible way to unlock them. Both of us took turns at trying to solve the Spiral and for the time we spent at the Maze Cafe, neither of us could solve it.

However our joint efforts came to fruition later in the evening when we were waiting for our food at the take-out restaurant; my brother-in-law managed to take apart the 5 pieces! Not bad for a first-timer! He did admit it was more by chance than anything else that he managed to fiddle it apart. He continued to play with the 5 separate pieces for a while but this time, couldn't get it to lock back together. This is where I managed to redeem myself - I took the puzzle away from him, studied it for a while, tried to determine which piece linked with which and thankfully, after some trying, managed to fit the 5 pieces back to the solved state. 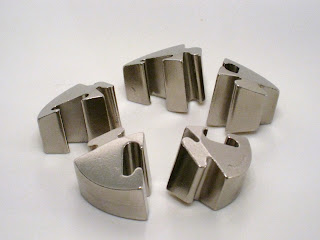 After the puzzle had been solved, we slowly retraced the steps to determine the correct way to disassemble and assemble. Once we figured out what were the moves, it was pretty easy thereafter to take it apart and solve it repeatedly. Overall a fun puzzle that can be easily taken anywhere. Three other bloggers have also written about the Spiral so you may wish to check out Oli's, Kevin's and Brian's puzzle blogs.
Posted by Jerry at Tuesday, October 18, 2011