What attracted me to the Isis Puzzle (particularly this one) was the nice purple colour. The Isis is pretty well known having been around for quite a while already, sold mainly by Sonic Games in the UK and also by PuzzleMaster. I had seen photos of limited edition ones of various colours on the net and my intention was to get one of these instead. Limited editions with unusual colours are hard to find anywhere. Finally, along came this used Isis for sale on Ebay and I managed to snag this one for a very reasonable secondhand price. This version is from the "Andrew Reeves Signature Collection" and made in purple with gold bands. The Isis which came to me was made for the American market and sold by The Sharper Image in the US. 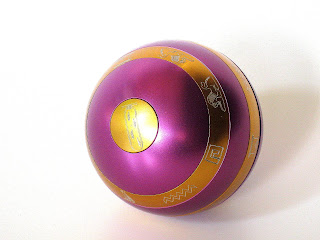 There have been both positive as well as some negative comments on the net about the Isis, one being the quality of manufacture. But my purple Isis appears not to have any quality issues as far as I could tell when I first took the puzzle out of the box (but wait...read on!). The Isis is a very heavy puzzle made entirely of aluminium. My version appears to be very well made, except for some scuffs and very minor marks on the surface which was obviously caused by the previous owner. 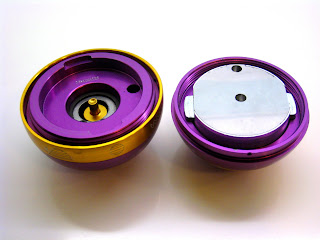 The object of the puzzle is to open the Isis and retrieve a special code of some sort which then leads to some other bigger competition online where a large cash prize awaits. I am not really into this sort of thing and right from the start I had decided I was just going to look at any solution available and solve it. While waiting for the Isis to be shipped to me in Singapore, I scoured the internet for information on solving the puzzle. Not only did I find tips and clues, but there are a few forum postings which give the entire solution, step by step. The one I found pretty useful can be found here. (WARNING! - If you do not want to know the solution, DO NOT click on the link and spoil your fun or frustration). For those more visually inclined, YouTube also has a number of videos showing how to solve the Isis and resetting the puzzle thereafter. Again, DOT NOT click on the link if you don't want to see how its done. Following the steps on video, I quite easily opened up the two halves of the Isis in under 5 mins or so.

I must say the internal mechanism is both quite clever and rather complicated. I would never have been able to solve it without the solution. After having examined the inner workings of the Isis, I decided to put the Isis back together and here is where I ran into a glitch; after the two halves had locked into place, I found there was still a gap of about 1-2mm between the two halves. I tried re-doing the steps again to open and close the puzzle properly but couldn't, not even after watching the video again several times. My Isis seems to have frozen solid and remains shut tight. At the time of this writing, I am still out of luck! If anyone reading this can offer any advice on how to re-open the Isis (* I can't even seem to hear the 3rd ball bearing now), this would be much appreciated, thank you!
Posted by Jerry at Saturday, August 06, 2011