This wood puzzle is from a limited edition series of 3 puzzles made by Eric Fuller. According to Cubicdissection, Eric was inspired to make these puzzles based on a wood joint puzzle he had seen on Facebook and subsequently borrowed from its owner, a Peter Wiltshire of Canada.  I was fortunate to buy one of the last few pieces available out of the 45 that was put up for sale. I had originally wanted to buy the No.2 as it is supposedly the most difficult to solve but lo and behold, it was sold out before I could get my hands on it. My last check on the Cubicdissection site shows that all 3 puzzles have been sold out. 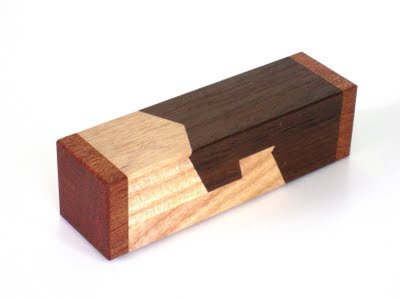 My version has the No.1 mechanism. The puzzle measures 1 inch square and is 3 3/8 inches long. It is made of a combination of three different species of wood namely Caroline Ash, Black Walnut and Sapelle used for the two ends. I would say that the puzzle is extremely well made and the finish is excellent. The fit of the joints between the two main separable pieces is very good and snug, not even a hint of looseness. Although pretty expensive (after all it is a limited edition item), it is definitely well worth the money.

When I first unpacked the puzzle a few days after receiving it, I initially thought the very snug fit was due to the high humidity of Singapore having "penetrated" the puzzle and caused the woods to expand. But after a day in my camera dry box (inbuilt with a electric humidifier at a No 44 setting ), the puzzle remained the same. I then realised that the very snug fit was due to the very tight tolerances of the high quality construction (and in part due to the internal mechanism). 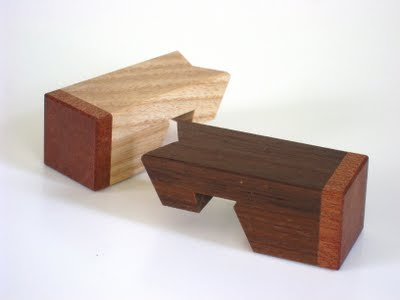 The object of the Wunder Puzzle is to separate the Ash (beige) portion from the Walnut (dark) portion. At first sight, given that the two pieces are joined in a such a way (at different and awkward angles) that separation seems virtually impossible. After holding and studying the puzzle for some moments, I begin my manipulation of tugging, pulling, pushing, sliding etc..to see how to get the pieces to move. Within 10 minutes or so, I managed to figure out the mechanism (and with some dexterity) separated the two pieces smoothly. As I took apart and examined the separate pieces, I thought the work put into making this puzzle and the intricacy of the mechanism was quite remarkable.

The No.1 in my opinion is not difficult and based on other reviews I have come across, it appears to be the simplest of the 3 puzzles. Unfortunately I have no way of comparing my No.1 against No.2 or the version with the Original Mechanism.  Nonetheless it is still a pretty tricky puzzle, and for the uninitiated, will pose a fair challenge. Other reviews and information on the entire Wunder Puzzle Series can be found on Neil's blog and Allard's blog.
Posted by Jerry at Sunday, August 14, 2011