The Six Key Mine puzzle was designed by the late Robert Rose who sadly passed away several years ago. This puzzle won 1st prize in the 2003 IPP Puzzle Design Competition.  It is one of the more unusual looking all-metal puzzles in the sense that it is neither squarish, rectangular, cylindrical nor just a sphere per se (like the Isis).  Rather the puzzle consists of a polished aluminium hollowed-out sphere or ball with six aluminium pegs inserted into its sides, which gives it an almost alien UFO kind of look. The original version by Robert Rose was also made entirely of aluminium except that the pegs there were anodized red instead of powder coated blue, as it is in my version which was made by Bits & Pieces.  Bits & Pieces also re-named the puzzle "Einstein"; as to why this is so I can't figure out. My puzzle is well made and of good quality. The pegs fit properly into their respective holes and can even be adjusted with a small screwdriver to either have a very snug or slightly looser fit. 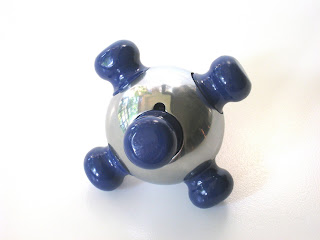 This puzzle is extremely difficult to find anywhere (and Bits & Pieces no longer makes or sells it).  I was really really fortunate to get the last piece from Oy Sloyd Ab. It was a situation where I just happened to be at the right (web)site at the right time.

The puzzle is slightly less than 3 inches wide from peg to peg and feels hefty in the palm. The object of the puzzle is to place all 6 pegs into the 6 holes in the sphere. This is not easy as all the 6 pegs are not identical to each other, especially where the bottom half (where there is a flat protruding portion) is concerned. The whole purpose of making each peg different is so that if you inserted a peg into a hole which it does not belong, it would block another peg later from entering. To make things even harder, the holes themselves all have different orientations relative to the sphere.

Despite a long while of trial and error to figure out which peg goes where, every time I would end up with a couple of pegs that couldn't be fully inserted because the first few ones were placed in the wrong holes to begin with. There are just too many combinations to test and I have a number of other puzzles to go through. I gave up trying after some time and went for the solution. Only then did I manage to get all 6 pegs correctly into the sphere.

Overall I would say that this is a very challenging puzzle indeed, at least for me. Some of my friends who saw it were also very intrigued by its unique appearance. And of course none had any clue as to what this strange looking object was!
Posted by Jerry at Saturday, August 06, 2011