Happy New Year everyone! My first post for the new year will feature the Popplock T3 which actually has been around for some time already, since 2009. I obtained the T3 from lock collector Peter Friedhelm von Knorre. The T3 is part of a series of six puzzle locks (T1 to T6) designed and manufactured by Rainer Popp of Germany. Having so far acquired the entire series from T2 to T6 (except the ultra/super rare T1, of which I am informed by Rainer that there are only 30 in existence), I was wondering which lock would be best to start my Popplock adventure with. Prudence and good sense suggested that I should start with the easiest and work my way towards the hardest. Having read the reviews of Allard, Oli, Brian, Jeff and Jonas and after checking with Oli, it seemed that the T3 was the easiest of the lot that I should begin with. 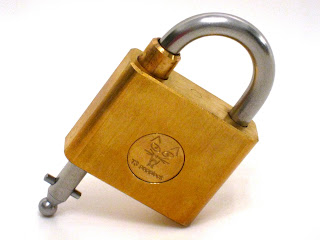 While not physically the largest lock in the series, The T3 is in fact the second smallest after the T6. Construction, fit and finish of the T3 is really excellent. Dimensionally the T3 is 10.3cm tall, 5.4cm wide and about 2.2cm thick and it is really hefty in the hand. A real quality product, which accounts for the rather high cost. The lock body is milled from a solid block of brass and the shackle is steel. In the middle of the T3 is a circular disc which is actually a knurled dial (not shown in the photo, but visible from the other side of the body) that runs through the centre of the lock. The face of the dial is engraved with the Popplock logo. This dial can turn both clockwise and anti-clockwise as well as be depressed into the brass body. The shackle runs through the body and protrudes out the bottom end by over 2cm. Unlike the other Popplocks, the T3 does not come with a key and there is also no key hole. 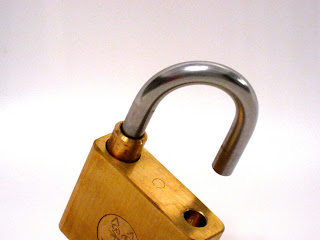 The objective of the T3 is of course to unlock the shackle. There are 4 steps to opening and unlocking the T3; well...depending on how you choose to count each step. These consist of, amongst other things, manipulating and twisting the dial. I took about 2.5 hours of on-off puzzling to solve the T3. Once you discover the solution, it is really simple to repeat solving the T3. You can literally do it in under 10 seconds! The mechanism involved appears to be deceptively simple, but because the lock is so well crafted, the final key (no pun intended) to solving the T3 is really very tricky and clever and unexpected. This step is certainly not easily discoverable, to say the least. I was really quite surprised at the way the T3 is solved.

Overall, I felt quite satisfied that I had solved this puzzle with minimal frustration and without resorting to the accompanied solution....a nice way to start off the puzzling year! And now, for the next lock up the difficulty scale.... the T5!
Posted by Jerry at Wednesday, January 04, 2012