I received this puzzle with the kind courtesy of Robrecht Louage. Robrecht, as you may remember was the winner of last year's IPP31's Puzzle Design Competition Jury Grand Prize for his 4-Steps Visible Lock; and also the designer and maker of the La Cerradura Doble, both of which have been reviewed earlier in this blog.

The Remove The Yolk was also an entrant 2 years ago for the IPP30 in Osaka, Japan. Unfortunately, being very limited in numbers, it is not commercially available from any puzzle retailer, as far as I am aware. 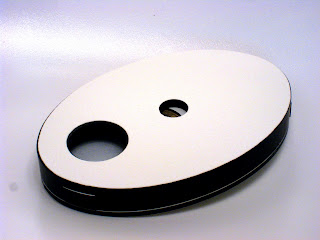 The Yolk is a relatively large puzzle measuring 12cm x 8cm x 1.5cm. Made of Corian (the material used in domestic kitchen counter tops) and metal (ie; internal ball bearings you can hear rolling about), the Yolk is very well constructed and exudes quality. The only visible moving part of the puzzle, the "sliding key" slides smoothly and nothing gets stuck during play. Corian is not light so the puzzle feels weighty in the palm.

The object of the puzzle is to remove a 1 Euro coin which is lodged inside the sliding key. The key is locked in the body of the puzzle. The key can slide left and right and protrude from both ends of the puzzle but within certain limits. While I had no sight of the internals of the Yolk, I can only assume that the locking mechanism is similar to that of the 4-Steps visible lock, employing the use of a maze and ball bearings. Hence the Yolk requires a certain dexterity to solve.

There are two holes on the top of the puzzle, a small one where you can see part of the Euro coin and a larger one for the coin to come out once the key is unlocked and the puzzle is solved. If you have ever puzzled over Jean Claude Constantine's Centrale puzzle, you will find the Yolk very similar to the Centrale.

However, that being said, while the locking mechanisms of both puzzles adopt the same principle in the way they work, they are well likely to be entirely different in design and construction. I guess unless both puzzles are cracked open (ie rendering them damaged and useless forever), we will never know for sure. 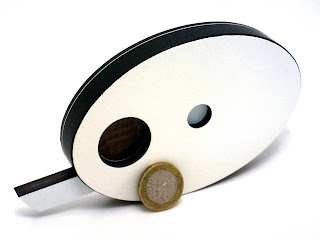 Like the Centrale, I spent a substantial amount of time on-off puzzling over the Yolk but could not solve it. I even placed the 4-Steps and Yolk side by side and tried to trace the movements of the 4-Steps to the Yolk, hoping that since they were both from the same designer, similar in dimensions and consist of sliding keys with ball bearings etc, there was a slim off-chance that the Yolk might have a similar mechanism to the 4-Steps, as the Yolk came out a year earlier before the 4-Steps...wishful thinking!!

Nothing worked and in the end I gave in and referred to the IPP30 online solution for the Yolk. I followed the movements from a series of photos but still the key refused to budge and the coin remained trapped. Finally I emailed Robrecht for help and he directed me to a YouTube video where (Robrecht's son) shows the way to remove the coin. Following the steps, I eventually managed to solve the Yolk. There are a total of 6 steps required to remove the coin.

Once you remember the steps, solving becomes easy and repeatable (which is always the case isn't it?... with the benefit of hindsight). Compare this to the 4-Steps Visible Lock + NOTHING VISIBLE....well you can guess how difficult it is! This is one of those puzzles which I would never have been able to solve without the full solution; even clues would not have helped, since you can't see what you are doing and you can't feel your way around either (unlike a Revomaze).

In conclusion, I wish to thank Robrecht for the Yolk and I am very happy to have one in my collection.
Posted by Jerry at Sunday, January 08, 2012