After solving the T3 recently, I decided to try my hand on my next puzzle lock, the humongous T5. Although the T5 is the fifth lock in the Popplock series, from what I gather, its the second easiest to solve after the T3. 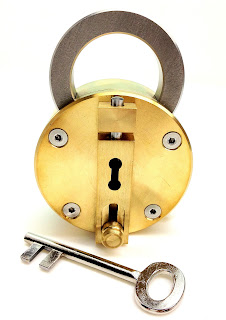 The T5 is a monster! Measuring a massive 10cm tall, 7cm wide and 4.4 cm thick, it weighs a whopping 900g.  That's about a third more than a Revomaze Extreme, which is considered already very heavy for a puzzle. Your hands get tired quickly while playing with this puzzle lock. The T5 is reminiscent of the old style "bullring" locks. The T5 body is milled out of a solid block of brass while the shackle is made of stainless steel. Quality of the T5 is first class with excellent precision, fit and finish. This puzzle feels super solid and probably can withstand anything short of a nuclear explosion. But such quality comes at a price and the T5 like all the other Popplocks, is very expensive. Notwithstanding, this solid T5 will outlast me and be puzzled over by my descendants from the next couple of generations. About 100 of these locks were produced in 2010 but currently none are commercially available except perhaps through private sales. 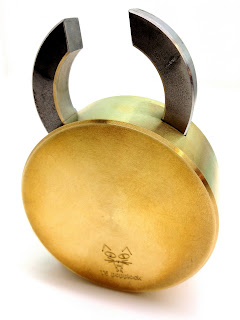 There are 4 steps to unlocking the T5 and I easily discovered the first 3. However the last step eluded me for quite a few days. Each time I would get stuck after step No3 and spend a long while pushing, twisting and pulling at the various parts of the T5 in my vain attempts to free the shackle...but with no success. Both Oli and Brian had commented in their blogs that the final step is the most challenging and the key (no pun intended) to unlocking the T5. After being stuck for some time, I suddenly realised that the last step was actually right before my eyes...it was my own perception of how a lock should be opened that had prevented me from solving the T5 much quicker! Indeed the final step is very clever and for me, totally unexpected. Looking back now with hindsight, the T5 is actually a rather fairly simple puzzle lock to solve.

Overall, the T5 is well conceived and an excellent puzzle in all respects (other than the price). As far as I can tell, it is not commercially available from any of the usual online puzzle retailers. So if one does surface from a private sale, just spend the money and don't miss the chance to acquire one!
Posted by Jerry at Tuesday, January 17, 2012