This is the second in the series of Eric Fuller's Havana "cigar box" puzzles and is named "Heather". I had earlier reviewed Box #1, the "Chris" a while back. For the background how Eric came to be making these puzzle boxes, you can read it here. 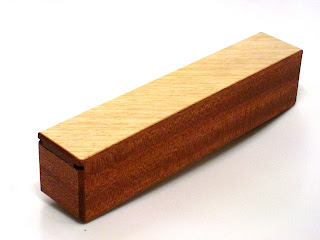 There were two versions of the box offered for sale on Eric's website, one in bleached lacewood and the other quilted primavera. The one that I ordered was the latter. Unfortunately none of the boxes in this limited edition series are available from Eric, as they were sold out within days of launch. The #2 is smaller in dimensions to the #1 and measures about 17cm long, 3.3cm wide and 3.6cm tall. Nonetheless, it still fits a corona size cigar quite nicely. The top lid consist of a thin layer of the quilted primavea venner over sapele wood. This forms a nice contrasting two-tone effect between the lid and the rest of the box which is constructed entirely out of sapele wood. Overall quality of construction, fit and finish is excellent.  The moving parts of the box are manufactured to very tight tolerances with nice and precise edges and corners. As I have always said, quality comes at a certain price and the #2 is no exception.

The object of #2, like its predecessor is to remove the cigar inside the box. So far I think all puzzle bloggers including Allard, Brian, Neil and myself are in agreement that the first 3 steps to opening the box are quite easily discoverable...and I would even venture to add, obvious. But hereafter was where some of us were stumped for a while; but for me, really stumped for a long time. After you have managed the first three steps, the top lid slides open partially and you get to see about a quarter of the cigar...but not enough for you to remove the cigar out of the box (unless of course you use really excessive force which is not the intention). There is a locking mechanism which stops the lid from sliding open further. Inside the #2, Eric had also added two normal looking match sticks. When I first saw the two red headed match sticks, I thought they were a nice touch to accompany the cigar...after all, not many people these days use matches to light cigars (or cigarettes) especially with the availability of the modern cigar lighter that is almost like a miniature blowtorch.  Suffice to say, a lot of the time, what I think initially doesn't do much to help me solve my puzzles. 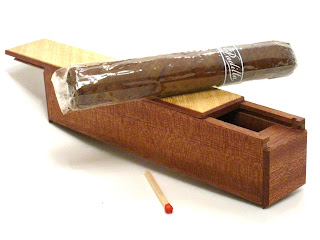 After the first three steps, I was at a loss....trying all sorts of things in all sorts of manner yielded no results. This went on for several weeks until I decided I didn't want to torture myself any longer and decided to ask Allard for some clues. Allard emailed me with some clues to help, but they were rather cryptic (he said he didn't want to spoil my fun!); so I had to figure out the clues a bit first to see how to use them! However with Allard's help and having read Brian's and Neil's reviews of the #2, I realised soon after that what I had to do to open the box was actually all there in front of me. As usual I had over-complicated things to the point that I missed some things that were obvious! Eric had done a very clever job of designing the box to actually open in a very simple way, if one was more observant and not overlook things in haste. Compared to #1, I think the internal mechanism of #2 is even simpler (Eric, if you are reading this, please correct me on this point if I am wrong!), yet the #2 is much harder. Of interest to note is that several of the panels of #2 can even be removed completely to view more of the insides.

Eric intends the next few boxes in the series to progress in difficulty. So if #2 is anything to go by, I will probably be struggling with #3 for a long time!
Posted by Jerry at Wednesday, May 23, 2012