In my first participation of the recent Baxterweb Puzzle Auction, I managed to bid and win the Oriental Toothpick Safe. Needless to say, given that its a Baxter auction, my winning bid didn't come cheap! This puzzle box was both a competition entry as well as Dave Rossetti's IPP21 Exchange Puzzle in Tokyo, 2001.

Designed and made by Frank Chambers, the body of the Toothpick Safe is made of Corian (the type of material used on kitchen counter tops) while the sliding lid is made of Velstone, a polyester resin similar to plastic. Towards one end of the lid is affixed a non-movable black round button. In the hand, the box feels pretty weighty and the corian has the texture of a smooth pebble. 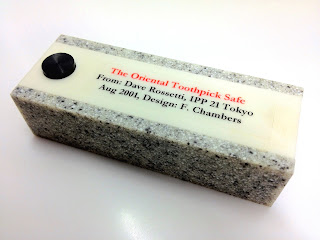 The Toothpick Safe is 9.9cm long, 3.6cm wide and 2.6cm tall. Despite being over 11 years old, my copy of the puzzle was in excellent condition with virtually no signs of visible wear, except for a bit of yellowing of the lid surface. All the eight corners of the puzzle remain pointedly sharp; usually corners will be the first to blunt especially after some rough handling or if previously dropped onto a hard surface. During the auction, there was a similar Match Box puzzle listed, made of the same materials, also by Frank Chambers but the high bid was just way too high for me.

The object of the puzzle of course is to slide the lid to open the box. The lid is able to slide very slightly to the left and occasionally to the right, sometimes a bit more to either side. It is obvious there is some kind of mechanism which prevents the lid from sliding further in either direction. I tried the usual methods generally associated with wooden puzzle/trick boxes of this nature. Tilting, rotating, spinning, shaking and tapping the box didn't yield any results. I resorted to the soft approach; gently nudging the lid, re-orientating the box in different directions, flipping the box over, upside-down, sideways etc but still no significant movement of the lid. All this went on for a good whole afternoon. I also checked out Brian's review of the Toothpick Safe on his blog but there were no clues to be had either. 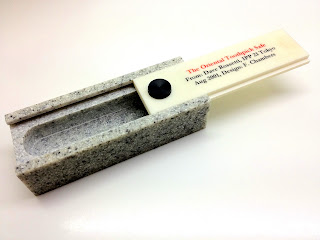 After quite a while of manipulation and seeing how the lid moves and stops, I had some inkling of how the internal "locking" mechanism works but I still was not certain (well if I were, I would have managed to open the box already, wouldn't I?). Finally after more fiddling here and there, at last I got the lid to slide all the way to the right. Inside the box were five toothpicks and a piece of paper (which appeared to another puzzle of some sort utilising the toothpicks, but not the solution to the box). To be honest, I am not sure what I did...I think I only managed to solve the box purely by chance through trial and error. Even though the box is opened to the fullest, I could not see the internal mechanism which unlocks the lid.

Brian mentioned that removing the black button would allow the lid to be removed totally and this would reveal the mechanism. However my black button appeared to be firmly embedded and I didn't want to risk the use of too much force in case anything got damaged. Anyway, I am not sure if it was intended that the black button be removed.

I tried to repeat solving but with no success. I emailed Brian for help since he had see the internal mechanism and he very quickly responded. Following his advice I was able to open the box one more time but since then the box has chosen to remain closed.

Overall, the Toothpick Safe is a very high quality and well-made puzzle box and considering its rarity, definitely a collector's item. What bugs me is that I still cannot figure out how the internals work, nor can I repeatedly solve it. John Rausch on his site mentioned that the mechanism in the box "is simple but clever"; so I guess I will just have to be satisfied with knowing that the puzzle I had bid for and won was well worth the money!

Update: I have been able to open the box three to four more times but not in succession! However after spending another evening on the box, I think I have figured out the mechanism (even though I can't see it) and now I can solve repeatedly quite successfully. No knocking necessary...just gentle nudging will do!
Posted by Jerry at Monday, May 07, 2012