I acquired this metal puzzle from Oli Sovary-Soos a while back when he had a sale of some of the puzzles in his collection. The Butter Churn is one of the puzzles designed by Marcel Gillen who is famous for his chess piece puzzles such as the King, Queen, Rook, Pawn as well as the Fire Plug, all these which have been reviewed previously in this blog. 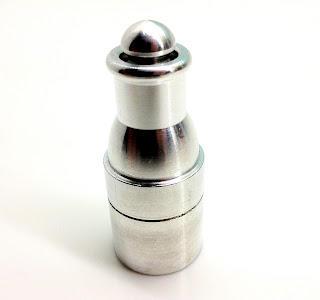 The Churn is a rather smallish puzzle, approximately about 6.2cm tall and 2.5cm in diameter at its widest. It is basically a "bottle-shaped" cylinder containing a shaft, one end of which is rounded. It is made entirely of aluminium and construction fit and finish is very good. It is quite rare to find one these days (and I had been looking for one for quite a while). I was fortunate enough to spot the Churn tucked in a corner in Oli's photo showing his spread of puzzles for sale. I promptly contacted him to buy it and a week later, it arrived at my doorstep.

The object of the puzzle is to remove the shaft inside the Churn. This is one of those puzzles where there is a hidden mechanism which locks the shaft. The shaft can be pulled about half an inch out but there it stops. One can also hear some ball bearings rolling around inside the Churn. Needless to say, I tried all sorts of ways which I knew to try to remove the shaft, tapping, knocking, gently nudging, twisting, rocking, shaking etc...and as usual nothing worked. Its a wonder that something this small and quite so innocuous can defy all attempts to be solved.

After several days of trying, I eventually gave up and emailed Oli for some help. Oli explained the mechanism and even he said he was only able to open it a couple of times and not repeatedly. I also contacted Jeff Chiou who had briefly written about the Churn in his blog. Jeff sent over the printed solution and a photo of the puzzle in the solved state. He too stated that it was a finicky puzzle. With the help I got, I finally managed (after quite a few more attempts) to extract the shaft from the Churn at last. After studying the internals, I placed everything back in place and tried to repeat the process...once again, it defied me for some time. 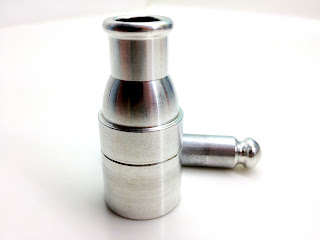 Well... overall a difficult (and finicky) puzzle indeed. I would not have been able to solve it without the solution. The mechanism does not look complicated, but I would say definitely quite unique. I think the Churn would have been a nice and interesting puzzle if there is a way to consistently solve it repeatedly. If anyone knows, please feel free to contact me. For now, I will not try to solve it again but just leave the shaft outside and consign the puzzle in a Ziplock bag to my puzzle cupboard!
Posted by Jerry at Wednesday, May 16, 2012