This is my fourth review of the Popplock series of puzzle locks by tricklock maestro Rainer Popp. Earlier in this blog, I had written about, in ascending order of difficulty the T3, T5  and T6. The next one up now is the T2, which is considered as the second hardest after the T4, not counting the very rare and elusive T1. 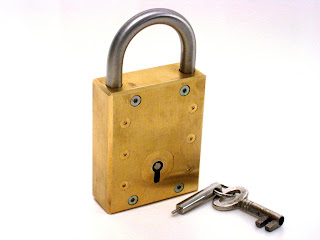 The T2 is a big lock (although not as massive as the T5) and measures about 10.7cm tall, 5.6cm wide and 2.2cm thick. The body is manufactured out of a solid block of brass and comes with a stainless steel shackle, making it a very heavy puzzle indeed. The lock comes with a key and a little solid rod with a sharp needle-like end. There is also a limited edition numbered version of the T2 made entirely of stainless steel named the T2VA. As with all Rainer Popp's locks, quality, fit and finish of the T2 is excellent. All moving parts are smooth as they should be. But of course such craftsmanship comes at a price and the T2 is very expensive. As of this review, the T2 appears to be only available from Finish online retailer Oy Sloyd Ab. In fact, it is probably the only Popplock left that is still available commercially as far as I can tell. I obtained mine from Wil Strijbos sometime last year; it was one of the few that he had left.

The T2 while resembling a big conventional padlock in almost every way does have some unusual external features consisting of 4 steel screws (which appears that can only be removed with a special Allen key) and six brass circular tabs each with a hole in the centre. Also, the key hole is on the front of the lock instead of the more usual bottom. 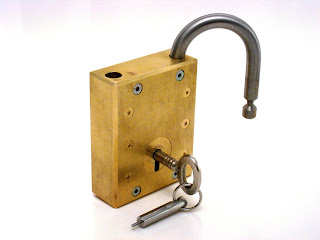 According to Rainer Popp, there are six steps required to open the lock and these are sequential. The T2 took me about fifity minutes to an hour to figure out and solve. For me it was my usual method of trying this and that with both the key and rod to see what works...there was really no systematic manner which I went about it since I had no clue as to what the internal mechanism of the lock was like. My previous experience with the T3, T5 and T6 did not help either. The first two steps are pretty easy and obvious. However steps three to six are far more difficult and if you get the sequence wrong, the lock well, remains locked. I was confounded with the steps for a while until I managed to get the hang of it in the right order. Once the T2 is unlocked, the shackle is freed by pulling it out. It does not spring out like a traditional lock. To relock, you have to push the shackle back in place and reverse the steps for unlocking.

While I did mention above that the T2 is second hardest, I actually found the T2 much easier than the T6, the latter which took me a lot longer to solve. Notwithstanding, I think the T2 has more than enough challenge and with its superb build quality, well worth the money and a real collector's puzzle. Four other puzzlers have blogged about the T2; you may wish to check out Oli's, Jeff's, Jonas' and Brian's puzzle blogs. Until Rainer Popp makes available the T7 which I hope will be sometime pretty soon, my next and last review of his lock series will be the T4; which by general consensus is the hardest of the lot...stay tuned!
Posted by Jerry at Saturday, May 12, 2012